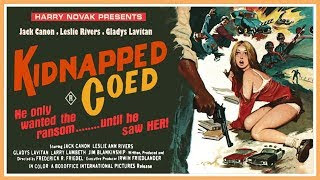 Severin Films has released an excellent double feature Blu-ray of director Fredrick R. Friedel's two only known features – Axe (1975) and Kidnapped Coed (1976). Both films star Jack Canon, an underrated actor who should have gone on to make a bigger name for himself and to star in bigger-budget films. Canon is excellent in both films and steals every scene he is in. Kidnapped Coed was also known as Date With A Kidnapper and The Kidnap Lover. Here is the trailer under the title Kidnap Lover.

In Kidnapped Coed, Canon plays a down-on-his-luck gangster named Eddie Mattlock, who kidnaps a young red-haired beauty named Sandra Morely (Leslie Ann Rivers). Sandra leaves her boarding house one morning and is held up at gunpoint in the back of her car by Eddie. He threatens to kill Sandra if she makes any attempt to escape. Eddie calls Sandra's father and demands ransom money for the safe return of his daughter. Although some reviews of this film suggest that Eddie is indebted to the mob as his motivation for kidnapping Sandra, the film never really makes this clear as his motivation.

Eddie takes Sandra to a sleazy, run-down hotel. The hotel clerk, played by Larry Lambeth, appears to be a questionable character who does not take his job very seriously as he lounges behind the counter all day drinking vodka and smoking as he tells his guests that today is his last day on the job. The camera pans to a closet behind the clerk's desk with a body laying next to cases of bottled soda. The viewer immediately suspects that there is something very wrong going on in the hotel and the clerk has something to do with it. 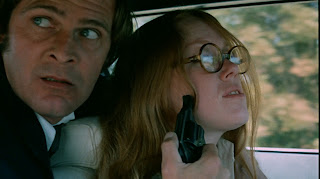 After entering their hotel room, Sandra locks herself in the bathroom and pretends to be taking a shower. She writes a desperate message in lipstick on a roll of toilet paper and throws it out the window. The hotel room is up three stories high, so she cannot jump out of the window. A young boy in the street down below kicks the toilet paper roll into the gutter.

While brushing her hair on the hotel room bed, a knock is heard at the door. Sandra opens the door to see the hotel clerk and another man pointing a gun at her and Eddie. She thinks the two men are detectives who have come to rescue her. The clerk and the other man tie up Eddie to a chair as the clerk rapes Sandra on the bed in one of the most brutal sequences of the film. Director Friedel builds great tension in this scene by showing close ups of Eddie's frustrated and bloody face as he watches the rape take place on the bed. The sex act is never shown on screen, yet the viewer fills in the blanks by imagining this sadistic act as Eddie's face helps to reveal the uneasiness of it. 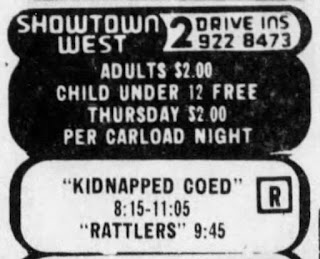 Eddie is able to untie himself from the chair and shoot both men in the genitals with a gun. The couple flee the room and drive to an abandoned farm shack. Here Eddie paces back and forth in the shack, smoking a cigarette, as he decides what his next move is. The two flee the shack when they hear a car approaching. They encounter a group of women bird watchers. One of the bird watchers is the store clerk in Axe, who has a bottle of ketchup shot above her head.

Director Friedel throws in little bits of weirdness in the film that give it some strange yet surreal characteristics. A close up of an old man rocking in a chair with a cane out in the street after Eddie shoots the clerk and his sidekick in the genitals is one example. A strange red-colored telephone booth not connected to any wiring appears out in the middle of barren fields in a number of scenes where Eddie goes to make a phone call.  He uses the telephone booth to call his mother, who hangs up on him. A child sitting on a curb flips Eddie the middle finger as he drives by shortly after kidnapping Sandra.

Perhaps the most effective aspect of both Axe and Kidnapped Coed is that both films have very sparse use of dialogue. Both films rely more on visual aspects to tell a story and to keep the narrative moving forward. The viewer is not always given any explanation for why many of the characters behave the way that they do, or why they are in the situation that they are in. This ambiguity keeps the viewer wondering and questioning the motivations of many of the characters in both films.

Also of interest are the many extras contained on the Severin Blu-ray. One of the extras interviews the cast, crew and director Friedel. In one interview, Friedel expresses his frustrations with producer/distributor Harry Novak, who completely took over the rights and distribution of both films, leaving Friedel with practically nothing in return. Friedel spent time at Novak's run-down office, combing through piles of old dusty boxes to look for the negative of Axe and Kidnapped Coed. He was able to locate both films for this official Severin release. The extras are every bit as interesting and exciting as watching both films. Happy viewing.

(Kidnapped Coed was defintely marketed as grindhouse/drive-in fare. Here are a few more newspaper ads. We'd like to thank David Grudt, of Long Beach, Calif., for his help in locating some of these vintage ads.) 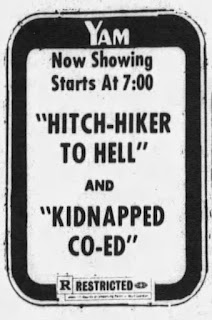