The Mad Monster -- George Zucco is a brooding genius maniac 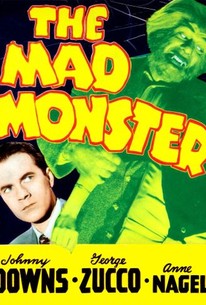 The first time I watched this vintage PRC cheapie, I trashed it and compared it to later dogs like Beast of Yucca Flats and The Creeping Terror. However, during my second viewing I warmed a little to the film. It is, as one reviewer has said, so bad it fascinates. I agree. The plot: Mad scientist Lorenzo Cameron (Zucco), rebuffed by his peers, injects wolf blood into a simpleminded handyman (Strange) turning him into a well-dressed dog/wolf man. Ostensibly, the crazy doc plans to create warriors to defeat the Nazis and other enemies with his injections, but he eventually uses the monster to kill his enemies. The plot, which is recycled pulp, includes a backwoods country swamp setting, a beautiful daughter, her reporter boyfriend, and the cops.
The bottom of the barrel budget hampers Mad Monster, but there are scenes of high camp that are bizarre: The opening sequence involves the mad Zucco injecting Petro in the laboratory with blood from a snarling creature in a cage. During the scene, the doctor hallucinates a debate with his scientist colleagues (who appear as misty personages). I guess low-budget director Newfield was trying to show Zucco is mad, but it seems like he's on an LSD trip. Also, some filter is used to make the country swamp seem dank and foggy, but it just looks like the air is filled with cheesecloth.
The film lags often and should have been trimmed to an hour. There are several scenes where actors, who have nothing to do, sit and wait for the camera to stop rolling. Despite the budget and bad script, Zucco, a veteran of low-grade horrors, does a capable job. PRC starlet Nagel is pretty, and has a voice that is a dead ringer for Judy Garland. Unfortunately her reporter/boyfriend Gregory has a squeaky voice. Strange, who later would play the Frankenstein monster in a few films, is terrible. As the dim-witted Petro, he's a fourth-rate imitation of Lon Chaney Jr's Lenny in Of Mice and Men. In fact, he seems to have a far better personality as the monster. In a small role, Padden is creepy as a cackling backwoods grandma. The film ends, as was often the style 60 years ago, with the young lovers embracing in front of a burning house. It's worth a rental if you like C and B movies from the 30s and 40s.
Posted by Plan9Crunch at 6:16 PM