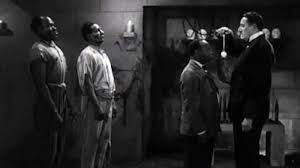 King of the Zombies is an old curio from Monogram, forgotten by most, enjoyed by purists. The plot involves three men in a plane who crash land in a West Indies island and encounter a very strange doctor (the role cries out for Bela Lugosi) who has a zombie-like wife, a cute secretary, and a collection of zombies. He also has an allied military officer held captive (it's WW2), and the convoluted plot involves the mad doctor wanting allied military secrets.
He's foiled, of course, as his zombies eventually turn on him. The film has none of the atmosphere, moods or chills of White Zombie. It substitutes comic relief for frights. The only character who shows any real depth is Mantan Moreland, who plays Jeff, the black sidekick of the crash victims. It's a very racist role, from a different, less-tolerant era, but Moreland, whose first name is even a tacky racist gag, brings life to his character. 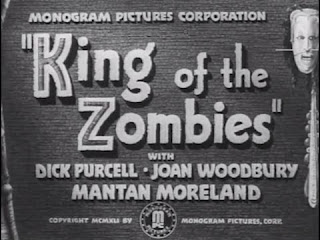 The scenes where he mistakenly believes he's a zombie are very funny. There is the usual romance between crash victim Purcell and secretary Woodbury. Not a great film, but worth a look for fans and others who want to study the C movies from poverty row 60-plus years ago. For Monogram, it's gold quality.
Notes: Yarbrough also directed the Lugosi PRC film Devil Bat; It's rumored that Lugosi was slated to play the mad doctor in King of the Zombies. It certainly would have been a nice contrast to his evil, mad doctor role in White Zombie. Watch King of the Zombies here via YouTube.
-- Doug Gibson
Posted by Plan9Crunch at 8:13 PM