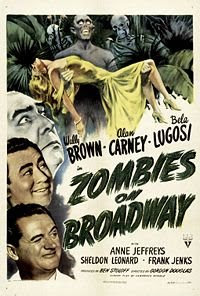 This is an enjoyable 1940s B movie with Brown and Carney, RKO's version of Abbott and Costello, as PR hustlers announcing that a new NYC nightclub, The Zombie Hut, will open with a real zombie. To them it's just a gag, but toughman mob owner Leonard tells them to come up with a zombie or else. That sends the boys to the island of San Sebastian where, with the help of a beautiful dancer (Jeffreys), the boys overcome a zombie creating mad scientist (Lugosi) and return with a zombie.

The cast is wonderful. Comedians Brown and Carney do a passable imitation of Abbott and Costello. Carney plays Costello, while Brown is the AbboTt clone who ends up with the strikingly beautiful Jeffreys. Leonard is menacing in his stock role as gangster hood. Thrown in for atmosphere is Darby Jones, who bugs his eyes out as impressively as he did in Val Lewton's classic I Walked With a Zombie. The film moves at a fast, easy pace. Lugosi is suitably conniving as the mad scientist and there's a fun twist ending.

RKO had semi-high hopes for ex-vaudeville performers Carney and Brown, but they never seriously threatened Abbott and Costello at the box office. Still, they made several amusing B features and fading horror star Lugosi appeared in two, the other being One Body Too Many. This seldom-seen-today film is a must for Lugosi fans and those who enjoy the old 1940s B programmers.

Directed by Francisco Lara Polop in 1972, this Spanish-Italian production, Murder Mansion, was not released until late 1973. The film is not a great masterpiece, but it manages to be genuinely creepy and entertaining.

The eerie music score by Marcello Giombini contributes greatly to the mood and atmosphere of the film. Lots of thick fog in a cemetery and an old mansion also contributes to the ominous atmosphere. This is not to be missed for any fan of 1970s European horror films.

The film follows three groups of travelers who are on separate journeys but manage to all end up in the same place by the film's ending. A motorcyclist named Fred, played by Andres Resino, is being chased by a car in the opening of the film, which gets the viewer questioning why the two are chasing each other. The car, driven by a man named Porter - played by Franco Fantasia, pulls over to the side of the road to pick up a sexy, young hitchhiker in a skirt out in the cold fall weather. Fred was also hopeful of picking up the hitchhiking woman, for obvious reasons.

Fred eventually makes his way to the same roadside restaurant as the driver and hitchhiker. Because the young woman experienced sexual advances in the car with Porter, she decides to leave with Fred instead. The two eventually get lost in a thick cloud of fog near a cemetery and end up on foot trying to find a safe place for the night.

On their way they encounter a tall man dressed in black carrying a giant scythe. Later they also encounter a hysterical lost woman named Elsa, played by Analia Gade. Fred, Elsa and the young hitchhiker make their way to a fog-infested mansion in the middle of nowhere. Surprisingly, Porter answers the door with a gun in hand. He asks the three to enter the mansion. Here we see a middle-aged couple who also got lost in the fog and ended up walking on foot to the mansion.

All the strangers are soon greeted by the young matriarch of the house and told they can stay the night until the fog passes. The film places much emphasis on the past of Elsa, with flashback sequences that show her relationship with her father and ex-husband. It is apparent from these sequences that Elsa has had great troubles with the men in her life. This maybe why she is so detached from the rest of the group in the mansion. She goes out of her way to avoid most of the strangers in the mansion, particularly the men. 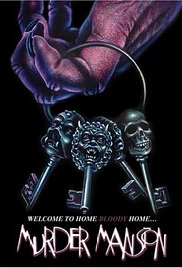 The matriarch of the mansion begins to tell her visitors strange tales about the history of the mansion, its former occupants and some of her family history of vampirism and witchcraft. Soon, the strangers are picked off one by one and murdered in the mansion. Watch carefully for the surprise, twist ending.

If you are trying to seek this film out, I recommend a good print of it that can be found on You-Tube. Sinister Cinema in Medford, Ore., sells a DVD print of it, but the entire film looks as if it was drenched in green punch. The same Sinister Cinema print has been known to show up in a number of value-packed DVD sets. The film was also marketed at Maniac Mansion. Happy viewing.
Posted by Plan9Crunch at 7:32 AM No comments:

What -- No Beer? Keaton's OK, Durante's a pain, but film grows on you

What -- No Beer? is a curio, a relic from the past. The plot of the comedy deals with prohibition and efforts to repeal it, an issue which dominated headlines more than 80 years ago. It was a box office winner due to its stars, Keaton and Durante, but is generally regarded as a mediocre comedy of the 1930s. It was the pair's last film together. Keaton's drinking problem and absences from the set caused the studio, MGM, to fire him even before the film was released. It was the start of a spiral into film oblivion for Keaton, and his career really did not surge again until television began to thrive two decades later.

The plot: Jimmy Potts (Durante) is a barber and Elmer J. Butts (Keaton) is a luckless businessman. Potts, incorrectly thinking prohibition has been repealed, convinces Butts to invest his money in a long-closed brewery. The stone-faced Butts moons over a pretty gangster moll named Hortense (Barry). He wants to be a millionaire so he can win her love. Seeing no other way to earn the million bucks, he agrees to get into the beer business. Police quickly raid the brewery and arrest the pair, but discover there's no alcohol in the brew. Later, they learn that a stuttering tramp at the deserted plant (Ates) was once a great brewer and real beer is made, which is a big hit. Soon the police and the mob muscle in on Potts and Butts.

There is a sexy pre-code scene in which lovestruck Keaton splashes sexy Barry's dress with water and she disrobes down to sheer underwear while the comic Elmer tries to avoid seeing what the audience is enjoying. The first time I saw this film Durante's obnoxious and loud character annoyed me but it does improve on repeat viewings and one is able to ignore Durante's excess and enjoy the time-capsule period and the final major comedy feature that Keaton starred in. His physical prowess is evident despite the boozing.

Durante bellows and brays and cracks many unfunny jokes. Although he is clearly half-bagged in many of the scenes, one can still admire Keaton. His talent for physical comedy is on display in several scenes, and his naivete and trusting demeanor leads to misunderstandings that bring laughs, particularly a scene where gangsters, sent to muscle him, interpret his bland replies as extreme coolness under pressure, and leave impressed.

What! No Beer? is not a great movie, but it's worth a rental to see an early sound Keaton offering. 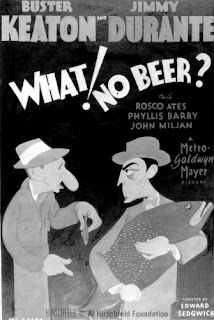 Posted by Plan9Crunch at 8:42 AM No comments:

As part of our infrequent, but consistent series that highlight the "other stars" of the Columbia comedy shorts, we bring you Barbara Jo Allen, otherwise more famously known as Vera Vague. Between 1944 and 1952 Vague made a couple of shorts a year for Jules White's comedy shorts team at Columbia.

"Doctor, Feel My Pulse," is arguably her best short say experts (I've only seen this one), although it isn't one of two later shorts that were actually nominated for short-subject Academy Awards. Allen, a very attractive brunette, created a shrill, spinster character on the radio in the late 1930s. As she moved to film, taking the stage name "Vera Vague,'' her beauty forced producers to make her more of a high-spirited, sometimes neurotic "best friend" and "flirt" in feature films. 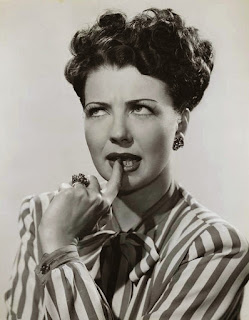 White's hiring of her to do Columbia shorts made her the rare female comic lead for a shorts series. As Ted Okuda and Ed Watz note in their book "The Columbia Comedy Shorts," her work suffered due to mediocre scripts and White's tendency toward more violent, male-oriented humor. However, the authors note that "Doctor, Feel My Pulse" is arguably Vague's best short. I've watched it three times and I agree it's a funny, entertaining farce.

Vera Vague, named as such, is a real estate agent, recently married to an attractive husband. Irving, (George Lewis) who tries his best to get a kiss from his wife. The problem is, Vera's a hypochondriac. She even gets the sneezes when she's talking on the phone. While in her office, she mistakes red ink for throat spray, with the resulting "Jules White"-type humor.

Eventually Vera makes her way to a doctor. On the way she develops an eye tic which makes the men she passes on the street into the office think she's coming on to them. It's an amusing, low-key humor scene. There's also a funny passage with comedy veteran Bud Jamison. Eventually, Vera mistakes a loony patient (Jack Norton) for the real doctor, and follows him home to receive some unorthodox treatment. 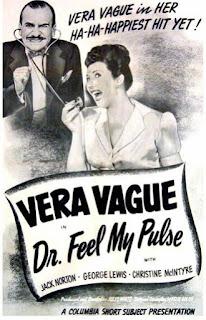 The real doctor and Vera's husband Irving arrive and discover the chaos. They decide to "teach Vera a lesson." Vera is told she has little time to live. Worse, Irving and Vera's pretty friend Sandra (played by the iconic Christine McIntyre) pretend that they are in love and plan to marry after Vera dies, enjoying her money in the process. Irving and Sandra have quite a kiss, although Vera gets the last kiss with Irving.

I won't give away the final scene but Vague really carries the short, particularly at the end where she effectively ends the two-reeler, taking charge of the action in a manner that would make "Lucy Ricardo" proud. In fact, throughout the short I kept thinking that Vague resembles a lesser version of Lucille Ball. She has that combination of zaniness and demanding total respect despite the absurdity she finds herself in.

In all Vague made 16 two-reel shorts for Columbia. During the filming of "Strife of the Party," (`1944) Vague refused to ever work with director Harry Edwards again. Sadly, the once highly regarded Edwards was battling alcoholism and would eventually be let go. Since Edwards was part of Hugh McCollum's Columbia team, Vague just moved permanently to White's unit. Her two Oscar-nominated shorts are "The Jury Goes Round 'N' Round" (1945) and "Hiss and Yell" (1946). "Doctor, Feel My Pulse" is a remake of "Calling All Doctors," (1937), with Charley Chase. Heine Conklin and Ann Doran join Jamison as uncredited actors in the short.

We're able to see this short via YouTube thanks to Greg Hilbrich, who runs the Columbia Shorts Departments website and has uploaded many Columbia shorts to YouTube via his page "The Shorts Department. We interviewed Greg recently.
Posted by Plan9Crunch at 2:18 AM No comments: