The Lady Mephistopheles is a compelling, well-crafted dark horror tale 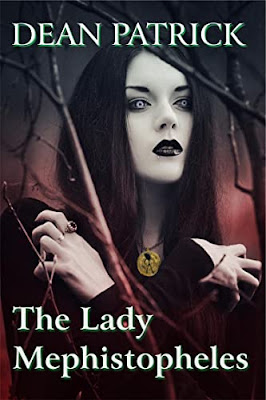 I do not review a lot of narrative fiction on this blog but I recently read Dean Patrick's new novel, "The Lady Mephistopheles," (TWBpress.com, Centennial, Co.) The 258-page work (it can be read over a dark and stormy weekend) blew the windows of my brain wide open (apologies to Hanif Kureishi.) It's very dark horror, external and internal. It involves an already deeply flawed and damaged man battling -- as best he can -- stark evil.

This is Patrick's first novel. I have read and enjoyed his short fiction in various publications, including here and here. Much of my review today stems from my Amazon review. I hope readers of this blog will take a chance on "The Lady Memphistopheles." It's an inexpensive dead-tree buy, and a very inexpensive read on Kindle. (Amazon link is on first mention of title above.) Review starts below:

This is an interesting read about man who encounters a beautiful woman. Not surprisingly, he's attracted to her. But he soon discovers she is leaving a hellish path of destruction where she goes, killing people, possessing others, corrupting both a church and a town.

The man, an alcoholic, realizes she's dragging him down to destruction, almost effortlessly, using his temptations and addictions as a tool. He only has periodic escapes from the ordeal, granted by her temporary absence. He eventually realizes the "Lady Mephistopheles" is not alone; there's another demon stalking him, trying to destroy the world as he knows it.

He takes his tired, physically and emotionally ravaged self, and tries to fight back. This a compelling read, with elegant, masterfully descriptive prose. It blends the horrors of the world with supernatural terror. There is another entity, a cowboy of sorts, a plain talking guy. The Lady Mephistopheles fears and loathes him.

To me, Patrick's unique, intense prose reminds of Clive Barker, John Fante and a bit of Nelson Algren. I'll just add that readers who trek into Patrick's vivid imagination may end up thinking twice about buying that expensive, massage/easy chair that looks so inviting in the store showroom. Heh, heh. By the way, Patrick plans a sequel to the novel to be released in the near future.