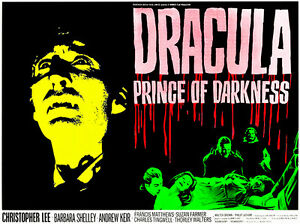 Dracula: Prince of Darkness, 1966, 80 minutes, Hammer, Color. Directed by Terence Fisher. Starring Christopher Lee as Dracula, Barbara Shelley as Helen Kent, Andrew Keir as Father Sandor, Francis Matthews as Charles Kent, Suzan Farmer as Diana Kent, Charles ÿBudÿ Tingwell as Alan Kent, Thorley Waters as Ludwig, Philip Latham as Klove and John Maxim as the coach driver. Schlock-Meter rating: 9 stars out of 10.
This is a magnificent horror film. Two English couples are vacationing in Eastern Europe. They are warned by a priest (Keir, who is great) to stay away from Carlsbad, and above all, an unmarked castle. Of course, they ignore the priest's advice and enter the castle. There, with the help of an evil assistant (Latham), Count Dracula (Lee) is resurrected from dust and the night turns to terror for the couples.
The acting is superb, and director Fisher's economical pacing prevents the film from dragging and maintains suspense. Keir, as Father Sandor, is a great vampire hunter, and carries much of the film with his commanding presence. Barbara Shelley as the ill-fated Helen Kent, undergoes an effective transition within the film. The first half of the film she's a repressed, shrewish early-middle-aged wife. However, after falling prey to Dracula's curse, Shelley becomes a beautiful, passionate woman with full cleavage. She literally looks 15 years younger and deserves credit for pulling off the transformation. Waters as Ludwig, an imbecile who helps Dracula, is a capable Renfield clone, and Latham is sinister and eerie as Dracula's living servant Klove. 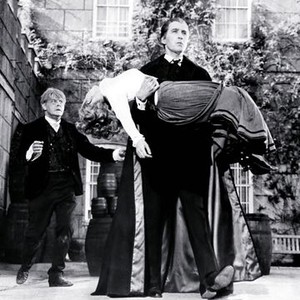 The film opens with a final shot from Hammer's classic The Horror of Dracula, where Peter Cushing destroys Lee's Dracula. It was the third Hammer Dracula film, but Lee's second playing the man with a cape. Lee produces scares, despite never uttering a word in the film. He is sinister, yet commanding. Not human, he prefers to communicate with snarls and shrieks of rage or triumph. I won't give away the entire ending, but Dracula meets his fate in a rather unusual manner.
One minor quibble: I wish the Hammer films were shot in black and white rather than color. I understand that it worked well in the 1960s, but today the Hammer films are a bit dated because of the color. They would appear fresher if black and white. The forest settings appear realistic and the castle is suitably creepy. It's a must-rent cult film. Better yet, buy it for your collection.
-- Doug Gibson
Posted by Plan9Crunch at 5:10 PM