Bela Lugosi takes on Mother Riley through the newspaper ads 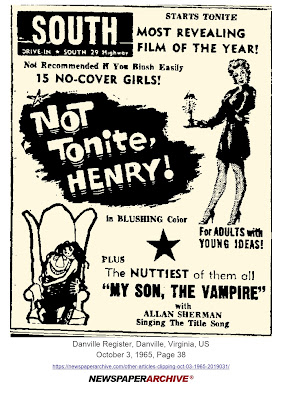 "Bela Lugosi versus Old Mother Riley," known in the United Kingdom as "Mother Riley Meets the Vampire," and 11 years later, as "My Son the Vampire" in the United States, has had a reputation as being a film that barely received a U.S. release. That's not completely true. It did fail to be released here in the '50s as "Vampire Over London," although YouTube has prints with that title. The film was an odd bill for Americans with Bela co-starring with British music hall artist Arthur Lucan playing his signature role. It had British references that would befuddle American audiences.
But as "My Son the Vampire," with an Allan Sherman song, it played second bill to a wide variety of films, including "nudie cuties" such as Merle Connell's "Not Tonight, Henry." (See above). A review I published in this blog is copied below: (Note the wide variety of top-heading films it was paired with. It even supported "Dr. Strangelove ...," as well as part of "Monsterama" multi showings).
---
LUGOSI'S FINAL BRITISH FILM ... is BETTER than many claim. In fact, it's the final film Bela Lugosi made where he looked healthy and in charge of the production. Its main weakness is that it's a unique bit of very low-brow British comedy that was popular from the 20s to the early 1950s. "Old Mother Riley" was an ugly, cockney, ignorant widow (played by actor Arthur Lucan in drag) who muddled herself into various ridiculous situations, dragging around her fatherless daughter, Kitty, played by Lucan's wife, Kitty McShane. 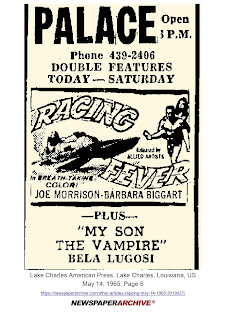 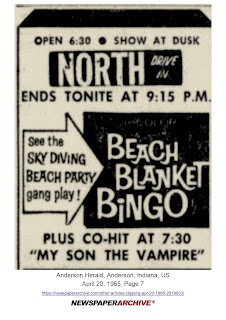 Lucan and McShane gained a reputation in music halls within the British provinces. They made a string of "Mother Riley" films that earned small profits in England but were not released in the U.S. By 1952, the series was about kaput, and Lucan and his wife were separated. Renown Pictures, which was producing Mother Riley films, noted the success of "Abbott and Costello Meet Frankenstein," and used a Renown executive, Richard Gordon, to get Lugosi to make "Old Mother Riley Meets the Vampire." Gordon, a friend of Lugosi, had arranged a Dracula stage tour for Lugosi in England. For $5,000, Lugosi, well past his prime, was eager to make the film.

The plot involves Mother Riley getting her mail mixed up with a mad scientist named Von Housen (Lugosi) who thinks he's a vampire. Mother Riley gets a killer robot, Von Housen gets a bed warmer. Von Housen uses the robot to kidnap Mother Riley and take her to his mad scientist house, with sinister servants and secret passageways, etc. Von Housen, delighted to find out Mother Riley has his favorite blood type, serves her lots of rare beef and liver. Von Housen, also seeking uranium to build more robots, has kidnapped a young lovely (Maria Mercedes) and her boyfriend. The girl's dad apparently knows where to find uranium, or something. 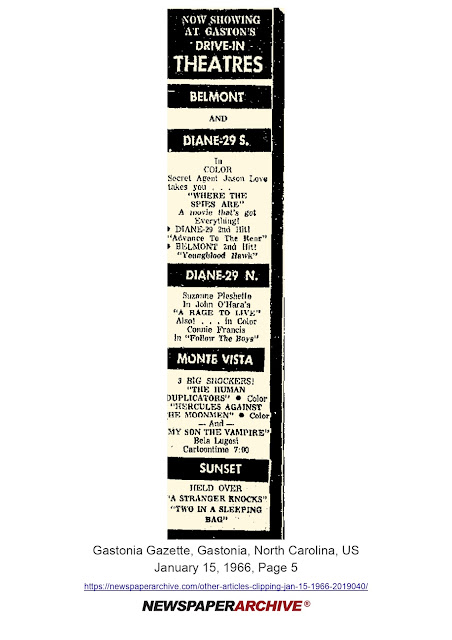 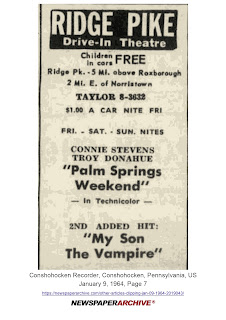 It's often not too clear because this movie is not really a Lugosi film. It's a showcase for Lucan's manic Mother Riley, with her rapid dialect that is hard for Americans to understand. Lugosi plays well in the film. As he did in every film, he gave it his all. Lucan's humor is very corny and provincial. The final half of the film is comprised of Mother Riley trying to get the cops to believe her, a battle with the robot, and a wild chase through London. As many critics have mentioned, "Old Mother Riley Meets the Vampire" fails because it makes the bad guys, the "monsters," look ridiculous. "Abbott and Costello Meet Frankenstein" succeeds because the monsters stay scary, and only the comedy stars do comedy. The director of the film was John Gilling, who later directed better films, including Hammer's "Plague of the Zombies." The role of a helpful maid, that might have gone to Lucan's estranged wife, Kitty McShane, was instead played by Dora Bryan, who later gained a measure of fame as a serious actress. 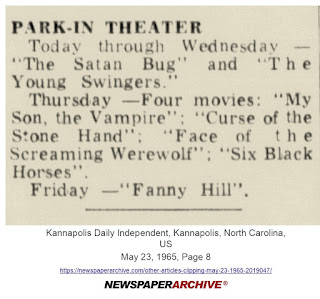 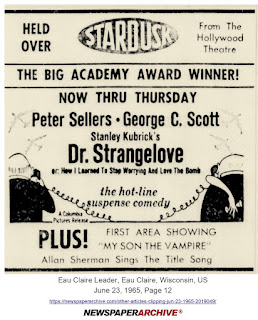 (The above two ads are from the July 14, 1964 Tucson, Ariz., Daily Citizen, researched by my friend David Grudt.) Gordon tried to pitch the film in the U.S. as "Vampire Over London," but there were no buyers. Lucan's Mother Riley act was too unique to British provinces for the U.S. market. Gordon also considered taking out all Mother Riley scenes and shooting new scenes with Lugosi for a film called "King Robot," but Lugosi's soon-declining health killed that idea.

In the early 60s, it was eventually released as "My Son the Vampire," with comedy singer Allan Sherman singing a song with that nonsensical title in the opening credits. That version, which omits a dark Lugosi chuckle at the beginning as well as the actor's screen credit, is what is sold in the U.S. today and plays on Turner Classic Movies. The original British version, which might be interesting for Lugosi completists, is available at Tubi. Sinister Cinema sells a print with the little-used "Vampire Over London" title. The credits at least include Lugosi's name, although there is no Lugosi chuckle.

I am indebted to my friend Grudt for finding this cool ad (below) from the Guardian London, Great London England newspaper of Sept. 18, 1952. It shows the film by its real title, "Mother Riley Meets the Vampire," and that it plays with a Joseph Cotton film. Also below, Grudt has researched an Oct. 27, 1951 snippet from The San Francisco Examiner notes that Lugosi in London preparing to shoot "Old (sic) Mother Riley Meets the Vampire." 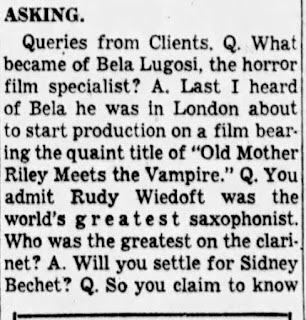 A footnote: For many years a myth endured that Lugosi's 1952 British Dracula stage tour failed and the actor and his wife were left stranded and broke in London. The myth further states that he made "Old Mother Riley ..." just so he and his wife could have transportation fare to return home. That myth is still repeated in books and on Web sites. It's completely untrue. As authors Frank Dello Stritto and Andi Brooks recount in their book, "Vampire Over London: Bela Lugosi in Britain," the Dracula tour provided steady work for Lugosi -- who enjoyed good reviews -- in England for several months. It played the English provinces and suburbs of London. Its only failing was that it was not of enough overall quality to make the West End, Britain's Broadway. The "Old Mother Riley" film was in fact a bonus for Lugosi, a nice windfall -- he and his wife had already earned enough money to easily make it back to the states. Today, the film, under its "My Son the Vampire" title often airs on the retro Movies channel, usually in the early AM hours.