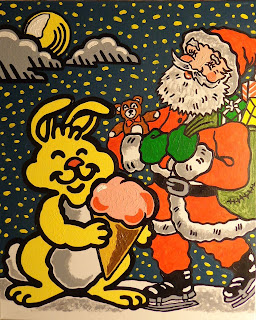 I thought I had seen all the terrible Christmas movies to be watched, until I recently saw “Santa and The Ice Cream Bunny.” The folks at RiffTrax, formerly Mystery Science Theatre 3000, provided hilarious commentary about the film on the evening of Thursday December 3. Without their commentary, I may have walked out of the theatre. The movie is so bad that it is not listed in any film encyclopedia I own. No film critic seems to be anxious to write about “Santa and The Ice Cream Bunny.” It is on the Internet Movie Database.

Santa and the Ice Cream Bunny at IMDB

Somehow Santa ends up stranded on the beaches of Florida soaking up the sun in his sleigh. His reindeer have abandoned him. He calls on some local children to help him get his sleigh back in operation. Each child is called by their name, except one little girl Santa calls "Kid." The children bring farm animals one by one to try and attach to Santa's sleigh. None of the farm animals, including a sheep and donkey, wants to be hitched to the sleigh.

The children suggest that Santa take a plane back to the North Pole, but he refuses to leave his sleigh abandoned. He complains about the Florida heat and sheds some of his clothing. Since Santa's sleigh is empty, the viewer is confused as to whether or not Christmas is over, or if Santa is just behind in delivering presents to children for Christmas.

With the failed attempt to get his sleigh in operation, Santa decides to take a rest and tell the children a story. Suddenly, the movie abruptly shifts to the story of Jack and The Beanstalk. This sequence was produced by Barry Mahon, a director who made soft-core sex features and films about fairy tales appealing to children. Other prints of “Santa and The Ice Cream Bunny” insert Mahon's Thumbelina (1970).

Jack purchases some seeds from Honest John — a cow salesman. Jack lives in a land where everyone is dressed like the Partridge Family. What follows is a series of bad musical performances by little Jack and the giant he steals a golden goose and harp from. Jack stands in front of out-of-focus, rear-projected images of the giant as he attempts to steal the poorly sculpted paper mache goose and harp on the table in front of the sleeping giant.

As the story of Jack and The Beanstalk finishes, Santa reappears on the Florida beach with the children. Suddenly, an antique fire truck driven by someone in a bad bunny costume appears to take Santa back to the North Pole.

This ice cream bunny makes the evil bunny in “Donnie Darko” (2001) look like the Trix rabbit or Bugs Bunny. He drives the fire truck like a drunken clown, nearly running over a dog and steering into pot holes. The most freaky part is when the bunny winks at a little girl who runs up to him after the fire truck arrives on the beach.

The one good aspect going for “Santa and The Ice Cream Bunny” is the beautiful black, white and red poster art created for the film of Santa in the fire truck with the ice cream bunny. This poster is likely a sought after collector's item for fans of bad movies.

For a much better holiday feature by Mahon, see the animated “Santa and The Three Bears” (1970).

This review was originally published in the Standard-Examiner newspaper. Art by Steve D. Stones.
Posted by Plan9Crunch at 11:08 PM No comments:

This David Hewitt cheapie anthology of horror tales of questionable scariness is legendary for the panning it has received from critics of the genre. The critics are right; this a poor film, with an incredibly low budget. For the entire five tales, I counted only two sound stages. In one case, to save money I suppose, a sound stage was darkened in an unsuccesful effort to make it appear to be a London slum.

Dr. Terror's Gallery of Horrors was essentially an attempt to cash in on the horror anthology craze of the mid 1960s; two better films of that genre that come to mind are Dr. Terror's House of Horrors and Black Sabbath. According to reviewer Tom Weaver in Cult Movies 17, Gallery of Horrors was shot for either $60,000 (that seems too high) or $20,000, or even $15,000! The narrator for the five tales is the ubiquitious John Carradine. He stands in front of (I kid you not) a rigid screen mat of a castle and shoreline. The mat only takes up half the screen, so the producers filled the other half with a blue background.

The acting, except for Carradine, is atrocious from all the performers, including, unfortunately, Chaney Jr. Actress Karen Joy is at least beautiful. And former '30s starlet Rochelle Hudson adds a little acting heft to one story. The tales are poorly developed. Reviewer John Stanley in Creature Features Movie Guide Strikes Again described the tales as the "scrapings of the horror barrel." There are "twist endings" but the lazy screenwriting (or perhaps it's the low budget) never allow the "payoff climax" to develop. A viewer will wait for the telegraphed twist at the end but just as it starts, the segment ends without exploring the consequences of the plot.

Like any low-budget poverty issue, the film is full of stock footage. According to Weaver's review, stock footage of castles and background music was lifted from the popular Edgar Allen Poe films of that era and other American International pictures. The special effects are laughable. Animated blood sweeps over the screen clumsily in an effort to end segments, and "fires" dance around stock footage of castles.

None of the five tales is particularly interesting, but some are less mediocre than others. The first concerns a couple (Gentry and Joy) who buy an old house in Salem. They find an old, supposedly 17th century clock (that type of clock did not exist in that era), re-set it, and an old man (Carradine, in the film's best performance, which isn't saying much)appears. He asks for an old family. The husband learns the family contained a witch (who never appears on screen by the way), and that Carradine and the witch are likely back from the dead because the haunted clock was re-started. The husband stops the clock, and Carradine burns up. The twist ending has another couple buying the house, setting the clock, and "presto," Carradine reappears.

The second tale is the worst. It concerns a vampire-like creature marauding London slum residents in the 18th century. The twist ending is embarrassing. The third tale may be the best. It had potential. A cuckolded living dead zombie doctor, murdered by his wife (Hudson) and corrupt colleague, returns with his faithful servant to exact revenge. Again, the low budget destroys any potential for surprise, and there is a laughably long far away stock shot of a carriage racing to the doctor's castle that seems to go on forever.

The fourth tale stars Lon Chaney Jr, as a former colleague of Dr. Frankenstein. Chaney's character is now a respected medical professor. With the help of two students, he resurrects a murderer. It's sad to watch the bloated semi-drunk, elderly Chaney stumble through his role. As Weaver points out, Chaney neither looks nor acts like a doctor and should have played the revived corpse (played by Vic Magee). Also, though it seems a colleague of Dr. Baron Von Frankenstein would be living in the 19th century, Chaney's character checks his wristwatch and answers a ringing 1960s-model phone in this episode.

The final episode is a poor twist on the Dracula legend that ends with Jonathan Harker (Gentry) turning into a werewolf and turning on Count Alucard, played by Mitch Evans, hands-down the worst Dracula in screen history. Despite the poor quality of Dr. Terror's House of Horrors, it's worth a rental if it can be found. It's an example of the kind of low-budget, harmless, sometimes fun schlock that played drive-ins and on Chiller Theater on TV in the 1960s and 1970s.

Notes: According to Weaver, Carradine received $3,000 and Chaney Jr. $1,500. Also, Weaver said Carradine was supposed to play Count Alucard, but had to leave to fulfill another acting commitment. Gallery of Horrors was the last speaking role Chaney Jr. had. Like many low-budget films, the film had many titles. Others include The Blood Suckers, Gallery of Horrors, Return From the Past (it's TV title) and even Alien Massacre! In 1981 it was released to video as Gallery of Horror by Academy Home Entertainment. How disappointed many teens must have been after renting this "unrated" title with a misleading cover, thinking it was a very gory horror flick, and discovering a hokey, tame unscary G-rated film! Today the film can be purchased at various online outlets.
Posted by Plan9Crunch at 11:19 AM No comments: