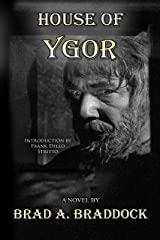 The actor Bela Lugosi created the iconic character, Ygor, in the Universal horror film "Son of Frankenstein." Lugosi's creation -- who hadn't even been in the two previous Frankenstein films -- upstaged Boris Karloff's monster in the 1939 film. The devious, grotesquely-bent-at-the-neck survivor of a hanging produced dread, fear and pathos for audiences. Ygor was in "The Ghost of Frankenstein" and then his brain was in the monster's body in "Frankenstein Meets the Wolfman." In that film Lugosi portrayed the monster.

But if Ygor fails to appear in the Frankenstein saga until film number three, it's fair to wonder where this deviously charismatic fiend came from. Author Brad Braddock, who penned an entertaining prequel to another iconic Lugosi film, "White Zombie," has provided genre readers, as well as fans of gothic horror, an explanation as to what exactly Ygor was doing prior to his activities in "Son of Frankenstein."

In "House of Ygor,"' Arcane Shadows Press, 2022, Ygor is a shepherd, living a hermit-like life outside the village of Frankenstein, trying to live down his past adventures with Doctor Frankenstein. Unfortunately, someone is stealing bodies, and the one-armed Inspector Krogh, who retains some sympathy for Ygor, warns him he is considered a suspect.

Ygor is discovered hiding by two villagers. They try to kill him and he kills one to escape. He heads to the ruined castle where monsters were created and makes a surprising discovery. He is then captured and eventually tried and hanged. Just before slipping into unconsciousness, Ygor sees his beloved sheep slaughtered by the village elders. Inspector Krogh is sickened and disgusted with the savagery of his fellow townsman.

I will not mention more of the plot because I don't want to deprive readers of enjoying the overall tale. This is a thoroughly first-rate Universal horror "variation" (to use the new preferred term for sequels and prequels of classic works). Braddock is a talented storyteller. He possesses a scholar's knowledge of the Universal horrors, the characters, the monsters, the locations, the lands, the traditions. He comprehends the overwhelming guilt, despair, malice, cruelty, fear, terror and injustice that creates such horrors.

Braddock's novel is fast-paced, with 36 generally short chapters spread over almost 200 pages. This is a plus as it keeps the narrative moving quickly, which is essential to maintain suspense. Often the chapters move from the Ygor narrative to the other tale. Besides the village of Frankenstein and the desolate castle, passages take readers through deep caves, gypsy camps, a boat on the sea, dark streets in London, and the decayed Castle Carew in England, which really exists.

The terror of the village elders who are picked off one by one for death delight the hardened, unfeeling Ygor, who is obsessed with revenge. Braddock also conveys well his friendship with the Frankenstein monster, which often is displayed more through eye contact and hand signals than spoken word.

An appropriate quick summary of "House of Ygor" is that besides being a good read, it keeps that familiar vintage Universal horrors feel within its pages. There is one more additional treat: an introduction by genre writer Frank Dello Stritto, which is filled with indispensible observations on the Universal films.