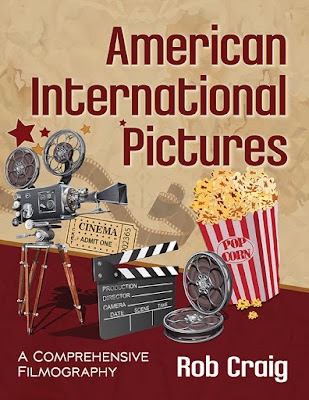 In the introduction to his latest book – American International Pictures – A Comprehensive Filmography (McFarland 2019), (800-253-2187) Craig makes it clear that this book is meant as an analysis of AIP films and their television product, and not intended as a history of the company or a biography of the company's founders – James H. Nicholson and Samuel Z. Arkoff. The Amazon link is here.

The sole purpose of this project, according to Craig, is to gather as comprehensive a listing of all film product that AIP was involved in marketing, which includes – all AIP theatrical releases, films and series released to television through AIP, and to chronicle all product released through one of AIP's subsidiaries or satellite companies. The list of AIP's satellite companies is quite long.

Also in the introduction, Craig mentions what he considers to be one of the most unique and interesting products offered by American International TV, which was a series of eight original productions by Texas cult filmmaker – Larry Buchanan. These productions were released under the “Azalea Pictures” banner in the 1960s. The films include – The Eye Creatures (1965), Zontar, The Thing From Venus (1966), Creature of Destruction (1967) and In The Year 2889 (1966) – all remakes of 1950s films. This is a topic which is no stranger to Craig, since he discussed the Azalea films at great length in his awesome book about director Larry Buchanan (The Films of Larry Buchanan – A Critical Examination – 2007 - McFarland ). 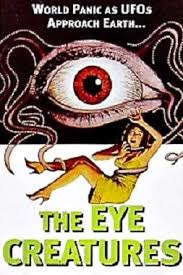 Many of my all time favorite low-budget films are discussed in Craig's latest book, such as: A Bucket of Blood (1959), The Screaming Skull (1958), The Phantom Planet (1961), Planet of The Vampires (1965), The Pit & The Pendulum (1961), The Robot vs. The Aztec Mummy (1959), and the Mexican import – Santa Claus (1959). It's great to see Craig give a positive nod to Santa Claus. I was beginning to think that my co-blogger Doug Gibson and myself were the only two human beings on the planet to appreciate Santa Claus and all its bizarre charm. 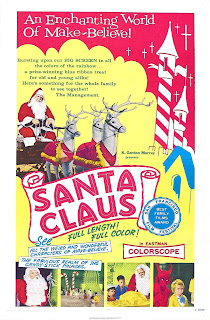 Craig's latest book reminds me a lot of Michael Weldon's – The Encyclopedia of Film (1983 Ballantine), only Craig's writing gets into much greater details of the films he discusses. One of his most interesting reviews in the book is for A Bucket of Blood (1959). This is one of his longest reviews.

Released Halloween 1959 and directed by Roger Corman, A Bucket of Blood is considered a horror comedy that comments on the then “beat culture/beat generation” of the 1950s. Craig mentions the film as being ahead of its time, since straight-forward horror films had played themselves out by the end of the 1950s. A Bucket of Blood brought a fresher point of view as a spoof and parody of horror films and beat culture while at the same time keeping a cynical tone. 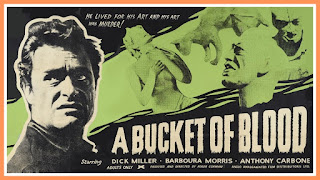 Craig mentions that he views Little Shop of Horrors (1960), a film made by Corman shortly after A Bucket of Blood and one which has some similar plot points, as the far more superior of the two films. Although I'm a fan of both films, I'm not sure I agree with Craig's analysis of Little Shop of Horrors as being a much better film. While it may be true that actor Dick Miller incoherently mumbles many of his lines in the film, portraying him as a doofus, as Craig points out, this does not detract from Miller's character as a struggling coffee house worker and artist. In fact, in my view, it greatly adds to his lonely, shy, and backwards character that helps to reinforce the stereotype of the “struggling genius artist.” A Bucket of Blood and Little Shop of Horrors make great companion films.

For further reading of Craig's work, refer to his excellent book on director Ed Wood: Mad Genius – A Critical Study of The Films (McFarland 2009), Gutter Auteur – The Films of Andy Milligan (McFarland 2012) – and his equally awesome book on films of 1957 – It Came From 1957: A Critical Guide To The Year's Science Fiction, Fantasy & Horror Films (McFarland 2013). Also refer to the above mentioned book on the films of Texas director Larry Buchanan. Happy reading.
Posted by Plan9Crunch at 8:34 AM