Night of The Living Dead (1968) – The Godfather of Zombie Movies 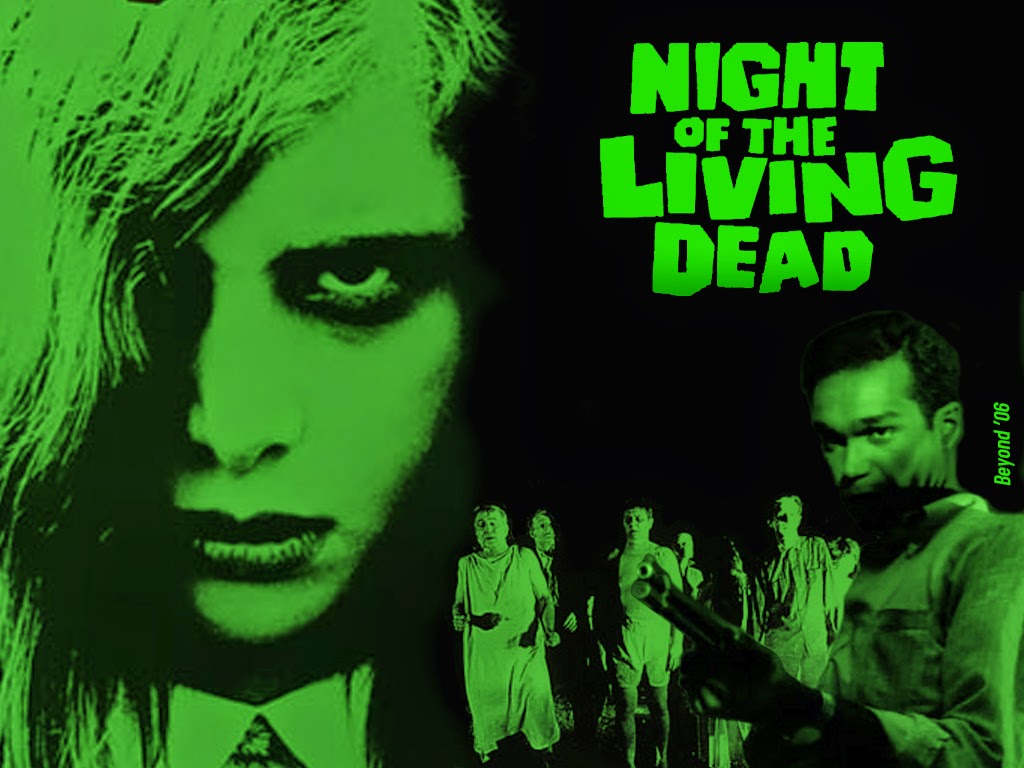 
There’s no question that director George A. Romero is the Godfather of the zombie movie. His Night of The Living Dead (1968) is the standard to which all following zombie movies are measured. Prior to this landmark black and white film, the zombie was portrayed as a figure created through voodoo ritual. This zombie was a slow moving, brain dead person moving in a sort of somnambulistic trace.

Romero changed this stereotype. In Romero’s world, zombies are vicious creatures who were once our friends, neighbors and loved ones, and they eat the flesh of the victims they attack. This was a big change from the voodoo zombie seen in Jacques Tourneur’s “ I Walked with a Zombie (1943).”
Watch closely, and you will see a film steeped in political and social commentary, and one which makes a statement about the breakdown of the family unit. The hero is a young African American man named Ben – played by stage actor Duane Jones. To cast a black man as the lead role and hero was risky business in the 1960s following a decade of racial tension, riots and Dr. Martin Luther King’s march on Birmingham.

The story may be familiar to you by now. Night of The Living Dead concerns a group of terrified individuals who have trapped themselves in a Pennsylvania farmhouse to protect themselves from hungry zombies. As the group fights desperately to survive the attack of zombies outside the house, the real struggle is between two men – Ben (Duane Jones) and Harry Cooper – played by Karl Hardman. Both are desperate to have complete control over the situation. The two continually argue with each other through the entire film.

Cooper’s wife and child and a young couple have barricaded themselves in the basement. Ben insists that everyone come upstairs and protect the ground level of the house. Cooper rejects this request, and a conflict between the two men occurs. Both men think they have the best plan for protecting the entire group, but as we see in the end – the zombies eventually break into the house, and only Ben is able to race downstairs and barricade himself in the basement for protection.

Ben survives the attack, but is mistaken for a zombie as a posse approaches the house and kills him. His body is thrown on a pile of dead zombies and burned at the end of the film. No heroes prevail in Romero’s zombie world.

The opening sequence of Barbara (Judith O’Dea) and Johnny (Russell Streiner) driving through an empty Pennsylvania cemetery covered with fallen leaves is one of the most effective scenes in horror cinema. Without showing a single zombie in the opening, the viewer immediately knows something dramatic and intense is about to happen. From the moment Johnny is attacked by a zombie wandering through the cemetery, the film never lets up on the zombie assault.

Shot on a shoestring budget by a group of Pennsylvania filmmakers working in television and commercials, the group formed the production name Image Ten based on the ten investors who put up the money and worked on the film. For further information on Night of The Living Dead, see Danny Peary’s “Cult Movies volume one” and Joe Kane’s excellent book “Night of The Living Dead – Behind The Scenes of The Most Terrifying Zombie Movie Ever.”

A remake was made in 1990 and 2006. The 2006 remake is a 3-D movie that comes with 3-D glasses if you buy the DVD.  Avoid the 30th Anniversary print with new scenes added. Romero had nothing to do with this version, and if you see it – you’ll understand why. The new scenes add nothing to the original film, and do not blend well with the original print.  Also avoid the computer colorized print that was released on VHS in the 1980s. The zombies are portrayed in a ridiculous green color that is laughable.

Don’t miss Romero’s excellent 1978 follow up – Dawn of The Dead. This sequel steps up the graphic horror and violence about ten notches and is in color. Happy viewing.
Posted by Plan9Crunch at 9:51 AM