Color Me Blood Red – A Struggling Artist Saturates His Canvases With Human Blood!

This 1965 black comedy-horror gem is of particular interest to me, not because it is a great film, but because it involves a struggling artist who turns his career around by employing human blood as paint on his canvases. It’s the third in a “blood trilogy” directed by the infamous “Godfather of Gore” – Herschell Gordon Lewis. The other two films are – Blood Feast (1963) and Two Thousand Maniacs (1964).

The film has some similarities to Roger Corman’s 1959 black comedy – A Bucket of Blood, in which another struggling artist gains local fame by molding clay around a dead cat and victims he murders.

Artist Adam Sorg, played by Don Joseph, discovers a way to use human blood as red paint when he witnesses his girlfriend Gigi cut her finger on a nail on the back of a canvas. Soon, he stabs Gigi in the head and drains her blood in a bowl to paint with. The result is his next great masterpiece, which is quickly hailed by art critics and the local public.

Like so many struggling artists, Sorg is an eccentric loner who hates the pretentious, elitist attitudes of critics and the art world. He dismisses the praise by local critics, but continues to produce new paintings using his own blood and the blood of murdered victims.

One particular tasteless sequence in the film has Sorg tying up and disemboweling a young girl in his art studio after he has just chopped up her boyfriend in a boat chase out on the ocean. Color Me Blood Red was later followed by Gordon’s more inferior 1967 film – The Gruesome Twosome, in which an old woman running a wig shop and her mentally challenged son scalp young local college coeds of their hair as part of the wig shop business.

Something Weird Video in Seattle, Washington recently released the documentary – Herschell Gordon Lewis: The Godfather of Gore. Watch it at your own risk. It may not be for those with weak stomachs. Enjoy!
Posted by Plan9Crunch at 2:46 PM No comments:

Some fifty-six years into the future, Forbidden Planet is still regarded as a great classic of 1950s science fiction cinema. The film has influenced countless numbers of sci-fi TV and feature length films, such as the Star Trek and Lost In Space TV shows of the 1960s, and even George Lucas’ Star Wars films. It’s hard to envision the droids that populate Lucas’ Star Wars universe without first thinking of Robby The Robot from Forbidden Planet. The other great star of the film is the bizarre electronic tonality music by Louis and Bebe Barron.

In the year 2257, a group of space travelers is sent to a distant planet called Altair IV to search for survivors of a lost expedition. They have spent over three years traveling in space. The group led by actor Leslie Nielson is met by Professor Morbius, played by Walter Pidgeon and his daughter, played by Anne Francis. Morbius has created a technologically advanced civilization on Altair IV aided by previous inhabitants of the planet called The Krell.

When Nielson and his crew learn of Morbius’ technological advancements, they order the professor to return to earth with them so that future plans can be made to explore and learn from Altair IV. Morbius is of course not pleased with this decision, so he sends out his ID monster – a monster from his subconscious mind, to destroy Nielson and crew. This plot detail is borrowed from Shakespeare’s The Tempest.

The Raven -- a horror classic 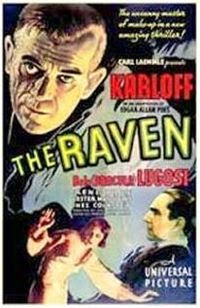 By Doug Gibson
Simply put, "The Raven" (1935) is a masterpiece. And credit for its perfection belongs to star Bela Lugosi, who is magnificent as the brilliant, deranged, courtly and insane Dr. Richard Vollin, who is so obsessed with Edgar Allan Poe that he has built real Poe-inspired torture devices in his dungeon.

Lugosi's Vollin is implored upon to save the life of a beautiful dancer, Jean Thatcher. Once he restores her to health, he fall in lust with her and wants her for himself. Rebuffed by Thatcher's father, he hatches a plan to invite the dancer, her father, her fiance, and others to be tortured and murdered. In his feverish mind, Vollin believes that by killing, he can be released from his Poe obsessions.

Vollin's unwilling helper is Edmond Bateman, a murderer on the lam who bewails his ugly face. He begs Vollin to bring beauty to his countenance. Instead, Vollin makes him uglier and then promises to fix his ugliness after he kills his guests.

Lugosi is juat brilliant. He's gentlemanly and manic, polite and cruel, courteous and a raving lunatic. The short, 61-minute film is tightly directed by Lew Landers. It is an example of Universal's cruelty to Lugosi that he received only half as much as Karloff earned, although Lugosi's Vollin is the real star, the real villain.

This is a film that should not be missed by any horror film fan.
Posted by Plan9Crunch at 3:07 PM No comments:

The Three Stooges in an old oater! Gold Raiders 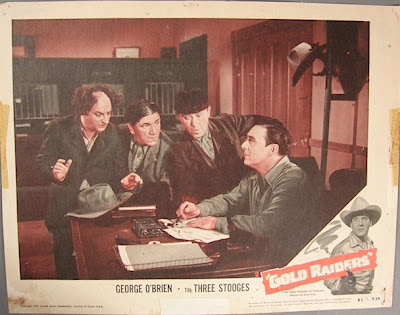 By Doug Gibson
"The Gold Raiders," 1951, B&W, 56 minutes, directed by Edward Bernds, starring George O'Brien as "George O'Brien," The Three Stooges, Moe Howard, Larry Fine and Shemp Howard, Lyle Talbot as Taggert, Sheila Ryan as Laura Mason and Clem Bevans as Doc Mason.
This "oater" is a curio, mainly because it features the Three Stooges in supporting roles. The very short B-film stars silent and early talkie cowboy film star George O'Brien as a lawman turned insurance man hired by mining companies to get their gold safely to the bank. Crime boss Lyle Talbot wants to steal the gold. He tries to get information on where the gold is being taken from a drunken old doctor (Bevans) who, with his stooped figure and drawling voice, is made for westerns.

The Three Stooges play bumbling peddlers who ally with O'Brien to keep the gold safe. Gold Raiders is an OK film. It's nothing special from the hundreds of other "oaters" made in Hollywood but an aging O'Brien does an OK job shooting and fighting. Talbot, who starred in Ed Wood films, is a good villain and the Stooges are funny.

Director Bernds, who helmed many Stooge shorts and later some features, told Cult Movies Magazine that Moe Howard was envious of Abbott and Costello and wanted to get into features. The result was Gold Raiders, an almost forgotten film today that was meant more as a comeback vehicle for O'Brien. Bernds recalled that the film was trashed by critics but, in my opinion, it really isn't too bad. Its main handicap is an abysmally low budget. It was shot in five days and looks it. One unintentionally funny scene includes a close-range shootout in a cramped saloon where almost no one seems to get shot. The film is also unique in that it may be the only western ever made where an insurance man is a two-fisted, gunslinging hero!

Despite the obscurity of Gold Raiders, the Stooges later made several features where they were the stars, including The Three Stooges Meet Hercules, Snow White and the Three Stooges and The Outlaws is Coming. Truth is, though, I enjoy the lean and mean Gold Raiders more than any of the later bigger-budget efforts. The Stooges are more effective as comedy relief, rather than the main components of a film

Notes: The makeup for Gold Raiders was done by Ed Wood regular Harry Thomas. Gold Raiders was released by United Artists but plans for a sequel with the Stooges and O'Brien were abandoned. The film was released to TV several years later and then sat for decades forgotten until 2006 when Warner Brothers released it on DVD. It can be bought via amazon.com
Posted by Plan9Crunch at 10:58 PM No comments: