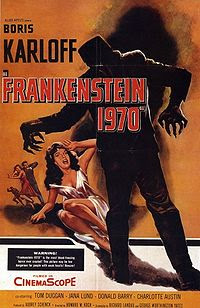 "Frankenstein 1970" is pretty bad. And that's a shame, since the 1958 independent film, directed by Howard Koch, stars Boris Karloff as Baron Victor Von Frankenstein, last descendant of the infamous Dr. Frankenstein. Von Frankenstein, who suffers torture wounds received at the hands of the Nazis, allows a film crew to his castle to make a movie. Wih the cash, they give him, he uses an atomic reactor to, after killing him, turn a former servant into a reanimated monster. More murders follow.

This film is just flat, more soap opera and corny interludes from cliched characters -- film crew, Dr. Frankenstein's solemn colleague -- than terror. The monster is a huge letdown. It just has a box on its head with slits for eyes. Even Karloff isn't that good. His languid, tired appearance seems like he is just phoming in his performance. His salary -- $26,000, was more than a fifth of the entire budget. Despite the futuristic title, is never clear if it really is 1970. In fact, the film's settings look like its late-'50s timeframe.

The best scene is the opening scene, where a terrified young lovely is pursued to her doom by a monster in a lake. Unfortunately, a "director" yells cut and we learn that it's the movie company. That's about if fright-wise. The 83-minute feature also featured Norbert Schiller, Jana Lund, Donald "Red" Barry and Charlotte Austin. Watch it only for Karloff. Even at his most lackluster, he still has worth for cult films fans. Watch the trailer above!
Posted by Plan9Crunch at 9:09 PM No comments:

Mars has a Wizard: Wizard of Mars 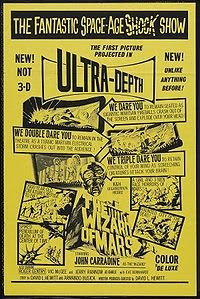 I really love this 1963 David Hewitt ultra-low budget space opera. I'll say right off that one of the aliens in this film is the same "Space Monster" from the Leonard Katzman schlock-fare also called Space Probe Taurus.
Ripped off from L. Frank Baum's famous tale, The Wizard of Oz, here is the Wikipedia description of 85-minute, color "The Wizard of Mars":
The title character is portrayed by John Carradine, who gives a lengthy monologue as a projection near the end of the film. The film centers on four astronauts--Steve (Roger Gentry), "Doc" (Vic McGee), Charlie (Jerry Rannow), and of course, Dorothy (Eve Bernhardt), shown aboard ship wearing Silver Shoes--who dream they are struck by a storm and encounter the Horrors of the Red Planet (one of the film's video retitlings), and eventually follow a "Golden Road" to the Ancient City where they encounter the title character, who is the collective consciousness of all Martians.
It's that crazy. The characters are wonderful stock space opera fare: The older mentor astronaut. The sexy woman astronaut who eventually gets the hots for the stud, leader astronaut. And, of course, there's the wisecracking astronaut. There is Hewitt's signature of touch of foamy, wavy fire waves that he has used in other films. I particularly like a strange creature -- guided by offscreen hands -- that menace the astronauts while they row in a Martian canal. The creature looks like a low-rent Tingler!
The space fare is low budget and I love the asteroid showers! This is a fun film. I first became aware of it while watching Something Weird OnDemand trailers. I found it on an old VHS that was titled Horrors of the Red Planet and said Lon Chaney Jr. was in it? WRONG. I later learned that Wizard of Mars was shopped as "Alien Massacre" along with Hewitt's schlocky "Gallery of Horrors," which features Chaney Jr. Such is the life of low-budget sci-fi being peddled in the early days of VHS and even Beta!
It became almost an obsession to find this film with its original title, and Plan 9 Crunch finally did, and old 80s VHS release had it. Carradine s wonderfully bizarre spouting nonsensical dialogue as "The Wizard." Of course it's all a dream. That really doesn't make sense, but again, the film really doesn't make sense. I loved it. Watch it as a double-feature with "Space Monster" or Hewitt's better "Journey to the Center of Time." You won't be disappointed.
-- Doug Gibson
Posted by Plan9Crunch at 4:09 AM No comments:

This is an interesting 1977 low-budget shocker with an interesting premise: Some low-rent diving tourists on a grade z sailboat hit a mysterious relic of a ship near an island. They go ashore and discover a tattered Nazi (Peter Cushing) who gives them the bad news that the crash has awakened an inferi-like (for you Harry Potter fans) of SS soldiers who have been underwater for 30 years. These SS killing machines pursue five desperate prey as they fight for their lives.
Besides Cushing, John Carradine hams it up early as the tourist boat captain, but he's killed off early, as is Cushing. Apparently, both worked four days for $5,000. The entire budget was $200,000. A very young, gorgeous Brooke Adams plays a bikini clad diving tourist. She is the only survivor. I don't feel bad about revealing that plot point since her rescue scene comes early and the rest of the film is flashback. That robs the film of much tension since we already know who will survive and who won't.
The SS inferi are creepy, with faces that are a blend of fishbelly white and green algae. However, their uniforms seem in way too good condition to have been underwater for three decades! The film has moments that scare, but the script and several actors are weak, the script can't decide whether to be a horror film or mystery, and the killing scenes are surprisingly tame. It's worth a rental or a cheap purchase, and it has developed small cult following the past 30-plus years. Read my Plan9Crunch colleague Steve Stones' review here.
-- Doug Gibson
Posted by Plan9Crunch at 10:13 PM No comments:

This early John Ford film from 1934 may have served as partial inspiration for later films, Aguirre: The Wrath of God, Apocalypse Now and even El Topo. It tells the story of a lost British Army unit in the Mesopotamian desert, slowly being killed, or picked off one by one.
Ford's opening scene is a classic. A lone British soldier on a horse, at first looks superior, surveying the landscape. Suddenly, he slumps off his horse, dead, victim of an unseen Arab assassin. The anxiety and feelings of deadly claustrophobia stay with the soldiers as they die in Ten Little Indians style. Victor McLagen, Wallace Ford, and Reginald Denny are among the soldiers under siege during World War I, but the best acting comes from Boris Karloff, who plays a religious soldier under stress who turns fanatical.
-- Doug Gibson
Posted by Plan9Crunch at 11:45 AM No comments: