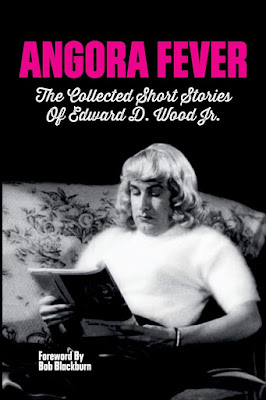 “Angora Fever,” a collection of several dozen pulp short stories from cult film director Ed Wood, is manna if you’re a fan of Wood or the hastily written, top-heavy with sex and action stories found in the “adult” magazines of a few generations ago. Buy it from the publisher or via Amazon here.

Let’s give three cheers, and a lot of gratitude, to editor Bob Blackburn for working so hard to locate Wood’s short stories. Blackburn provides a preface detailing his friendship with Wood's widow, Kathy, and after her death his efforts to restore  much of Wood's professional work.

But nevertheless, Wood churned hundreds of these out. And while they fit the definition of pulp; written with a barely one draft, tailored to the literary “raincoat” crowd, by a writer fueled by booze, cigarettes, and Kool Aid, they are the work of a very talented wordsmith.

It’s both heartbreaking, and inspiring, to think of Wood churning so many tales out during his several-years tenure with Bloom. It’s tragic that he eventually drank himself out of a job he desperately needed. At the same time, the scenario of a tragic, aging drunk, with occasional shakes, trudging into an office with booze concealed and easily outpacing the younger staff is an endearing, dark Runyonesque tale.

Like any writer with a cult following, Wood is unique. His stories are thrillers more than horror, with a lot of crime, sex and violence. One of Wood’s signature tools is to have a “twist ending.” One of the best examples of this is in “The Hazards of the Game,” where two Wood stock characters, the hit man and the sexy woman, in this case an underwear model, spend a leisurely evening making love. There’s a lot of dialogue in the story. The characters talk of sex; the woman wistfully talks of what it would be like to be a family. The man talks of his role in life and never questioning what has employers tell him to do.

As mentioned, these are action stories, heavy on stereotypes and cliches. It's doubtful Wood had time, or inclination, to do much research. But they are still morbidly interesting, the reader assuming a voyeur's role into a sordid scene. One story in Angora Fever, “Where Did Charlie Get Off the Train?,” seems more personal. It’s about the suicide of a failing -- financially at least -- filmmaker. In “Nightmare of Ecstasy,” Rudolph Grey’s oral history of Wood’s life, there’s no shortage of Wood’s disappointment in the movie industry recollected.

“Angora Fever” is a second recent collection of Wood short story fiction gathered by Blackburn. “Blood Splatters Quickly” came out a few years ago, with 32 stories. Yes, I’ve read it. Also, more than a decade ago, I read and reviewed a small collection of Wood’s fiction, titled "Muddled Mind …”. It was all that was out there at the time.

One of the better of these quickies is “Blood Drains Quickly,” a tale of a psychopathic killer who makes the mistake of letting a victim live, and suffers for that oversight dreadfully. It has a nasty, sociopath narrator telling the tale. Honestly, the narration reminds me of an old Stephen King short story, I’ve forgotten the title, in which a nasty, sociopath doctor marooned on an island, I think, cuts off parts of his body to stave off starvation and survive.

“To Kill a Saturday Night,” a tale contained in “Blood Splatters Quickly,” is good enough to be included in The New Yorker magazine. It has a rough, but definite pathos environment, with two derelicts spouting off about a murder they might be planning. It was also gathered in “Muddled Mind” and I wrote this about it in my review (here). An excerpt of my review: “The tale of a pair of bloviating farm workers contemplating casual murder on their day off will remind readers of John Steinbeck’s “Of Mice and Men.”

“Angora Fever” has a story almost as good. It’s called “Mice on a Cold Cellar Floor,” and details the presumably doomed life of a pair of teenage lovers only able to be together amidst a filthy environment. The boy is a harsh, criminal, misogynist. The girl too young and far too trusting. But their frustration and angst really gets through to the reader. It jarred my heart to hear the lovers casually discuss a future that includes a suicide pact.

“Angora Fever” is a history lesson of the pulp short story genre. Wood was a good writer. Not every story clicks but readers should read these tales with perhaps more patience than Wood exerted writing them.
Posted by Plan9Crunch at 10:23 AM