Boris Karloff in a time of pandemic, Isle of the Dead 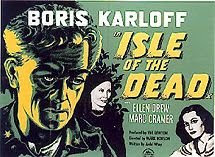 The mid 1940s was the beginning of a transition period for thrillers. The great Universal monsters were now B pictures, and soon to be relegated as fodder for comedy teams. The terrors of the nuclear age to come would bring a new type of horror star, Godzilla and various over-sized insects crawling across movie screens. But in between that change came several great horror films from Val Lewton, who knew how to exploit the supernatural and make the spines of World War II movie-goers chill.

In this current era of Coronavirus pandemic, Isle of the Dead seems appropriate to discuss. It is about our worst fears, death, the plague and even being buried alive. Producer Lawton and director Mark Robson are old hands at slowly building a story, creating unease, and then slamming the viewer with a terrifying climax. There is a scene, about two-thirds of the way through, that takes this film from suspense to terror. An invalid woman (Katherine Emery) fears being buried alive. It's a legitimate fear since she suffers from spells where she appears dead. She suffers a spell and is presumed dead and put in a coffin. In a crypt, the camera pans to her coffin. She screams, and desperate clawing is heard inside. It's a scary payoff to a well-made chiller.

The plot involves a dour Greek general (Karloff) and an American reporter (Cramer) who visit an isolated island near the front of a war. They spend the night with an anthropologist and his several guests (all of whom have been forced to the island to avoid the war). A British guest (veteran cult actor Skelton Knaggs) is discovered dead. A doctor decrees it to be the plague. The general orders everyone confined to the house. One by one the plague starts to claim its victims.

As mentioned, the film drips in atmosphere. The first scenes show Karloff and the reporter walking through a battlefield strewn with the bodies of dead soldiers. There's a creepy sight of suffering soldiers hauling away wagons full of the dead for disposal. As Karloff explains, it must be done immediately to avoid the plague. The house on the island has a claustrophobic feel, none of the rooms are too large. The island is dark, foggy and creepy, the crypt dark and forbidding.

Karloff does a very capable job as a villain who can still inspire some sympathy. The heartless, but courtly Greek general who places "rule of law" over mercy is a study of extremism from two sides. When the plague starts, Karloff's general scorns the superstitions of an elderly Greek maid, preferring to put his trust in the doctor. But when the plague claims the doctor, a disillusioned Karloff switches beliefs. Still the extremist, he allies with the maid, and with frightening intensity, believes a young woman named Thea (Ellen Drew) is possessed with an evil spirit. They plot to kill Thea.

Today very few horror films rely on atmosphere to turn suspense into horror. Most try to use foreground shots (like John Carpenter's Halloween) to create tension. Some succeed. Most don't. Too many filmmakers err by throwing away characterization, thinking that a quick knife killing serves as a payoff to a lazy viewer. Val Newton's Isle of the Dead is a reminder that creating a scary film is a gradual process that takes time and care.
Posted by Plan9Crunch at 2:26 PM