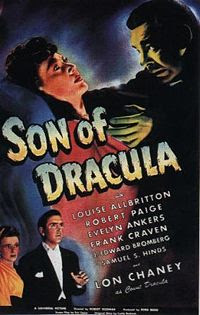 Son of Dracula is an enjoyable old-time horror flick with a suitably creepy if kind of miscast Lon Chaney Jr. as Count Alucard (spell it backwards) visiting the American South in hopes of forming an unholy alliance with Kay, a woman (Albritton) obsessed with the occult. There are some above-average special effects. The Count is finally foiled by his confederate (Albritton) as she helps her confused one-time fiance Frank (Paige) destroy the Count's daytime resting spot, thereby destroying him. However, at the end, Frank -- unable to bear what Kay has become ot share her wish to be "undead" -- burns her in her coffin. Several stock characters (family doctor, visiting Hungarian professor, old Hungarian gypsy woman, dopey sheriff) also match wits with the Count.

As mentioned, this film is a winner and worthy of a buy or stream. It's fast-paced, has a unique plot and always keeps the viewer's interest. But here are some quibbles. First, Chaney is a weak Count. He provides no charm of sinister finesse like a Lugosi, for instance. Instead, he comes across as an intimidating brute. In fairness to Chaney, however, the script is very unkind to his character.

This is the first Dracula who fails to hold control over the woman he has added to the ranks of the undead. In fact Albritton's character is the bigger villain in the film. She uses Count Alucard to gain immortality, marries him and then plots quickly to kill him and replace his space in the coffin with Paige. I often wondered why Bela Lugosi was passed up for this role. After seeing Count Alucard's role, I'm not surprised. Lugosi can play many roles, but a cuckolded Count is not one of them.

Although the film seems like an A production for its time, you can also see the beginnings of the Universal monsters' slide into B moviedom in Son of Dracula. There are characters (a judge) and Kay's sister Claire (Ankers) who are introduced and then remain undeveloped and fade away. There are stock black servants which are dated and racist today. Also, although it seems there is a town somewhere in the set, it never seems to be seen.

On the plus side, Paige is very good as the bewildered fiance and Albritton makes a charming villianess. It's a great Universal early horror and well worth 80 minutes of any cult movie fan's time.