Planet of the Vampires a great Mario Bava film 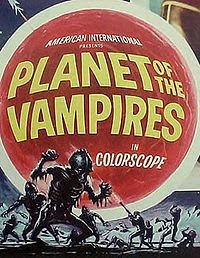 "Planet of the Vampires" is a very interesting, effective 1965 early Mario Bava film. It involves astronauts entering a seemingly deserted world and slowly being picked apart one by one by desperate aliens seeking new life forms.

Unlike many genre directors who thrive on gloomy, forbidding black and white images, Bava manages to convey fear and horror through the use of vivid, almost garish color. That is notable in his horror anthology Black Sabbath. In Planet of the Vampires, the color, particularly red, along with the claustrophobic atmosphere of the spaceship and even the colorful planet, add to the tension and terror the crew feels as they are picked off one by one.

The only major American star in the 86-minute film is the late character actor Barry Sullivan as the space crew captain. Brazilian Norma Bengall also stars. The rest are capable European actors. The story is similar in narrative and design to the later horror classic Alien.

Believe it or not, there are also similarities to the recent Stephenie Meyer book "The Host." Bava's "vampires" are not necessarily evil; they are desperate creatures trying their best to stave off extinction. They'll do anything to achieve their goals.
Planet of the Vampires is a must-have film for Bava fans and 1960s "space opera" fans. There's a "twist ending," but alert viewers will see it coming. Watch the trailer below.