This semi-obscure Joe E. Brown comedy is a treat for cult movie fans who want to watch a pre-Dracula Lugosi. As Pancho Arango, a hot-tempered Latin lover, Lugosi shows his comic skills in dueling with the clownish, wide-mouthed Brown, who pesters him.

Plot involves Brown and Collier as playboys traveling across the country and meeting girls. In California the leads fall in love with various blondes, including Munson, who played Belle Watling in Gone with the Wind.

Film has funny moments and Lugosi shows his versatile, comedic  character acting skills. I caught this long-awaited viewing courtesy of Turner Classic Movies. Opening scene is of a "baby party" for adults that is prurient when one looks at the women, and creepy when looking at the males, especially Brown! Despite the odd opening, this is a typical well-done First National Pictures pre-code comedy. Thelma Todd was a beautiful actress who did comedy well, even appearing as a star in Hal Roach shorts.

The best part of this film is that Bela Lugosi easily disproves a long-held idea by too many that he can only horror films. He has great comic timing and would have made a dependable comic foil for Brown in several films had studios execs had an inkling. Lugosi also showed great comic skills in the 1933 star-fest, International House, with W.C,. Fields.
Posted by Plan9Crunch at 9:24 AM No comments:

Cat and the Canary an early haunted house film 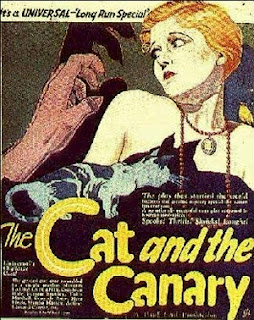 “The Cat and the Canary,” a 1927 silent from Universal, directed by Paul Leni, a student of the German expressionist school, is a fun spooky/silly horror/comedy. It’s based on stage plays of that era — the 1920s — that were popular, with spooky forbidding mansions, red herrings, young lovelies in peril, bumbling cops, and homicidal maniacs. While “The Cat and the Canary” is a reaction to what was popular 85 years ago, it also over time is the genesis of many of the cliches that horror film viewers expect from haunted houses for at least two generations after the film.

There’s the forbidding mansion in a state of decay, the ominous housekeeper, the deceased, crazy-in-life owner who has gathered his heirs to the mansion for a reading of his crazed will. There’s the collection of eccentric relatives, including a young lovely and a bumbling good guy who has a crush on the lady. There’s the stereotypical murder, a killer on the loose, and escaped madman, a bumbling cop or two, a sinister doctor, a creepy lawyer, and a couple of other oddballs thrown in for good measure.

That’s essentially the plot of “The Cat and the Canary.” Twenty years after crazy old rich Cyrus West dies, he gathers, by his command, his heirs to the mansion. They include the young lovely Annabelle West (Laura LaPlanche), and her cousins, bumbling Paul Jones, (Creighton Hale), and more forbidding Charlie Wilder (Forrest Stanley). Hale’s Jones, by the way, looks just like a befuddled “Harry Potter,” complete with the glasses and unkept hair. How ironic that generations earlier, we had a “Harry Potter-ish” character in cinema. Of course, he’s not a wizard, although he ends up being the hero in this tale.

Not surprisingly, young lovely Annabelle is the heir and will keep her riches as long as the doctor is assured she is not insane. If she’s proven insane, an unnamed person, whose name is in the lawyer’s pocket, will inherit all the cash. (I forgot to mention that the envelope with that name was apparently opened up.) Such are the convoluted but fun plots. It isn’t long before the lawyer is murdered and a murderous fiend is haunting the mansion, trying to bump people off and harm our heroine.

As mentioned, director Leni incorporates much of the silent German expressionist film style. Expressionist thought puts feelings, inner particularly, above the action that is being portrayed. We feel the haunted house through the prism of the actors, more so than through the action we are seeing. The haunted mansion is almost dream-like in its many hallways, stairs, curtains and claustrophobic atmosphere.

I particularly like one of Leni’s touches at the beginning, where he portrays Cyrus West’s madness by portraying him as a “canary” surrounded by cats eager to feast on him. It is important to recall that this is a spoof, and there is very witty comedy throughout. Hale in particular plays the wimpy-turned-heroic hero as well as many silent comedians such as Lloyd and Chaplin. Also providing very strong acting chops is Martha Mattox, who plays the forbidding, gloomy housekeeper, Mammy Pleasant.

“The Cat and the Canary” was a big hit and was remade in 1930 as “The Cat Creeps,” which was Universal’s first sound horror film. A Spanish version was made as well. Unfortunately, “... Cat Creeps” is believed lost. In 1939, it was remade as a comedy vehicle for Bob Hope. There was a 1961 Swedish version made and in 1970, Richard Gordon produced a British version. However, the 1927 version remains the best version. The film was, as mentioned, based on a popular play of the same name.

The classic haunted house setting, the expressionist horror mixed with laughs provides a nice atmosphere fit for a Halloween viewing. The film is often shown on Turner Classic Movies. 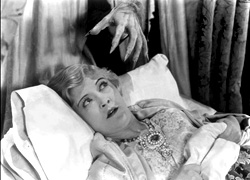 Posted by Plan9Crunch at 9:31 AM No comments: