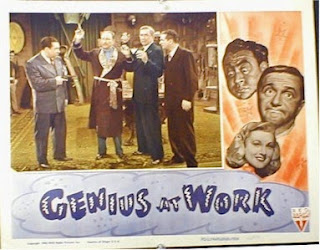 (GENIUS AT WORK airs today, July 25, 2018, at 12:45 pm EST on Turner Classic Movies) I finally got a chance -- courtesy of Turner Classic Movies -- to see the Lugosi film that for decades was just about impossible to catch; RKO's 1946 "Genius at Work," a 61-minute programmer for the B comedy team of Abbott and Costello imitators Wally Brown ("Bud") and Alan Carney ("Lou"). It's the second RKO B feature Bela Lugosi made with the low-rent team, who were at least better competitors to A and C than Duke Mitchell and Sammy Petrillo were to Martin and Louis. The first film was the better-known "Zombies on Broadway," with Lugosi a standard mad scientist.

Bela's a henchman named Stone in "Genius at Work," second banana to the film's chief baddie, criminologist Latimer Marsh turned serial killer "The Cobra," played by Lionel Atwill. Wally and Alan are radio detectives who are playing up the Cobra's kills. Ironically, Marsh is their mentor, advising the unsuspecting pair. Eventually, the boys radio show produce, the very attractive Anne Jeffreys, starts to suspect Marsh as a suspect and he and Bela's plan the demise of the radio boys and their lovely producer.

It's important to recall that this is a vehicle for the comedy pair of Brown and Carney. Atwill and Bela play second fiddle as time is spent to provide the stars A and C-type comedy interludes. Perhaps the most effective comedy is when the boys find themselves in Atwill's Marsh's torture dungeon museum in his home, and later when they sneak back into Marsh's home. During these scenes the sinister Lugosi plays off the boys well, scaring them in comic manner.

Here's some notes I provided to a fan/historian of the genre, a co-author of a book on Lugosi, who has yet to see the film: It's nothing special, but it's a fast-paced, enjoyable comedy mystery. Brown and Carney (the Abbott and Costello wannabes) are radio detectives trying to solve kidnappings/murders by "The Cobra." A criminologist, played by Lionel Atwill, is sort of a mentor to them. However, Atwill is The Cobra and with his henchman, Stone (Lugosi) is planning to off the boys because their radio producer, played by Anne Jefferys, is starting to get suspicious. There are a couple of cops for the comedy team to play off and a scene in a torture dungeon museum in Atwill's home that is played for laughs with Lugosi tormenting the duo. It's only an hour, and the second third drags a bit due to some poor plotting but it picks up well at the end. I kept thinking that Lugosi (deserved) the Atwill role until the final reel, where Atwill's character disguises himself as an old woman in a dress, and now I'm glad Lugosi had the lesser role. Final note: No great shakes, but better than Leonard Maltin or Richard Bojorksi claim it is. I'll watch it every so often.

This was the great Lionel Atwill's final feature role; he was dying of cancer and the film was released after his death. He seems a little frail but does a good job. It's a relatively quick film and has enough lowbrow laughs and a good-enough performance from Bela to merit repeat viewings. I mentioned that it was hard to find until recently. "Genius at Work" was recently as an On-Demand DVD offering of several Brown and Carney films but at a pricey cost. Fortunately, TCM aired it and a long-time goal of this reviewer was fulfilled.

Notes: The film was the final of a three-picture deal Lugosi had with RKO. The others were "The Body Snatcher" and the aforementioned "Zombies on Broadway," which Jeffreys was also in. It was his second-to-last movie assignment with a major studio. His last would be "Abbott and Costello Meet Frankenstein." Leslie Goodwins directed "Genius At Work," the last of the comedy duo's eight pictures with RKO..
Posted by Plan9Crunch at 12:56 AM No comments:

Laurel and Hardy very funny in Our Wife

This is my second-favorite Laurel and Hardy short. Only "The Music Box" is better. The comic timing is superb and the cast is an iconic dream. Besides Ollie, Stan and Finlayson, the minister who married Ollie and Dulcy is played by cross-eyed silent and early sound comic Ben Turpin. Turpin, born in 1869, was a genuine pioneer of the comedy silent era. One of his early, early films, 1909's "Ben Gets a Duck and is Ducked," filmed in Chicago, had him going into a public duck pond. He was arrested by police officers not amused at the film company's permit-less filming efforts!

The best scene in "Our Wife" involves Ollie, Dulcy and Stan trying to fit into an impossibly tiny getaway car, procured by the hapless Stan. The film is easy to find as part of collections offered via amazon, etc. It also pops up on Turner Classic Movies once in a while. But, thanks to YouTube, you can watch the film above. More info is here.

Invasion of the Rocket Monsters - a sci-fi film in development 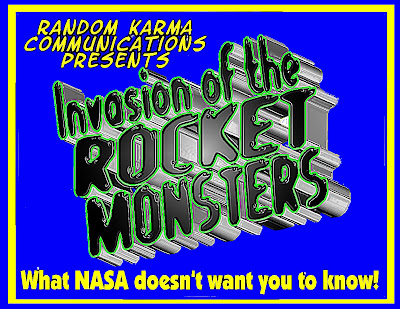 Essay by Sherman Hirsh. (Sherman, a screenwriter and director, has written several fascinating essays for Plan9Crunch, including his accounts of being involved with the making of films, including Surgikill, Lords of Magick, Scream Zombie Scream, and more. We're pleased to publish this latest essay.)

I came across an interesting word:TERATOPHOBIA. It literally means “Fear of Monsters”.

No, I did not make that word up, but I did coin a derivative word: TERATOPHOBIAPHILIA, which I propose to mean “the condition of liking to be scared by monsters”. Most people have it to some extent, some to a pathological degree. Those are the fans who hit every monster convention. Hey, at least we have monster conventions.

I've been thinking a lot about monsters lately, like how monsters used to be a large part of popular culture, and how the films from that bygone era are still popular. In recent years, most monsters were zombies, with an occasional macro-monster like Godzilla and his ilk.

Where were the mutants, lab failures, atomic giants and bugs, killer brains and trees and other plants and goo, rabid robots, ravenous germs and the rest? Oh, sure, we had Alien and Predator, and a couple Mummies, but did they spark a whole era of monster media like they did in the 50's. OK, not yet. Plus, all that rancor against stop motion ( which is enjoying something of a comeback ) and the MAN-IN-THE-SUIT menaces versus CGI has put the whole pantheon of monsters in the old creepers home. Even the zombies are on hiatus.

I grew up on a steady diet of monsters. Between FAMOUS MONSTERS, the only magazine on the newsstand that told how movies were made, and SHOCK THEATER making Friday nights a horror/Sci-Fi film fest, monsters were old friends, making us delight in fright to the tune of a wailing theremin. And then suddenly, out of nowhere, OUTER LIMITS added more fuel to the pyre. New monsters added to the weirdness universe made my teen years almost tolerable. I wanted a piece of the action. I wanted to make movies. I did.

As a filmmaker, I have the means and skills to put my imaginings on a screen somewhere. I have made 3 features, one, LOVE SLAVES OF THE SHE-MUMMY, a homage to Late Night Horror Hosts, SCREAM, ZOMBIE, SCREAM, a zombie farce, and most recently, OVERLORDS OF MAGICK, a wizard fantasy follow-up to a film I wrote for someone else 30+ years ago.

However, for a long time, I have wanted to indulge my love of Science Fiction. I wanted to shoot on a space ship, and have my protagonists battle good old fashioned monsters. I did all kinds of other genre projects, but sci fi had to wait. Hence, my latest project, INVASION OF THE ROCKET MONSTERS. I don't want to give away too much, not that the title doesn't spell out what you could expect to experience.

Basically, my zombie hunters from SCREAM, ZOMBIE, SCREAM are called out of retirement to apply their skills to exterminating a gaggle of alien monsters on their own massive spaceship. Since no one has seen SZS, this won't mean much to most people, but what if you could see SZS before INVASION is released? You can. I have re-edited SZS into six episodes which will be up on YouTube to be followed by INVASION soon after. Eventually.

There is a reality show on SyFy called FACE OFF. Teams of pro and emerging make up artists compete for cash and prizes by creating full body costumes and original faces based on assigned themes. I have been watching the show, looking for ideas to steal for my monsters. Except that, so far, I haven't seen anything worth stealing. These artists are very talented, but their creations are keyed to the themes of the assignment, and not to the requirements of a story, so the designs are more works of static art than movie monsters.

Does this worry me? I'm in Los Angeles, the Film Capital of the World. I will find someone to build my six full body monsters. And if they insist on being paid, I will make the damn monsters myself.

Less is more. INVASION OF THE ROCKET MONSTERS will not be a feature. It will be between 30 and 60 minutes. Face it, the concept won't support a feature without a lot of unwelcome filler. A nice tight featurette has several advantages. One is money; shoot less, spend less. One of the reasons I avoided Sci Fi is that it calls for special props, costumes and sets. OVERLORDS OF MAGICK was a Sword & Sorcery fantasy with a Medieval look.

Props and costumes and set décor for the Middle Ages are easy to get from multiple sources. For some reason, uncopyrighted science fiction objects that aren't derived from movies and TV shows aren't mass produced, and if I want a convincing ambiance, a lot of my visual assets will have to be fabricated. One more challenge. So what? Shooting could be 7-10 days, instead of as many weeks. Less footage, less post-production. Less pressure means more time to prepare and rehearse. AND there might be enough money left over for another project.

I'm saving up. The longer I wait, the more money I'll have saved up for the project. I calculated that if I plan for a start date sometime in October, the finances will be a minor concern. That's plenty of time to prepare all the details. INVASION OF THE ROCKET MONSTERS could be out for Christmas, a welcome antidote for all those girly Disney princess flicks that will be clogging up the cinemas.

There's a lot to do. I have to perfect the script, set up the studio and prepare the sets, commission half a dozen monsters that don't look like badly made Muppets. Oh, and learn to play the theremin.

Plan 9 Crunch has been a great source of support relative to several of my projects, and any news about INVASION OF THE ROCKET MONSTERS will originate here. If you like monsters, I got 'em! There's a lot to do. I have to perfect the script, set up the studio and prepare the sets, and commission half a dozen monsters that don't look like badly made Muppets. Oh, and learn to play the theremin.
Posted by Plan9Crunch at 12:04 PM No comments: