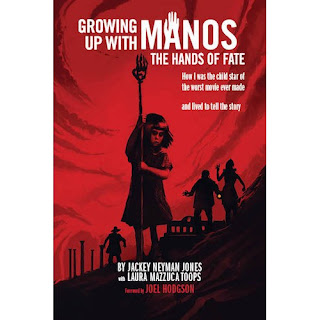 In her book "Growing Up With Manos The Hands of Fate," published by BearManor Media, Jackey Neyman Jones chronicle's her life story in revealing how she came to be cast as seven year old Debbie in the film. Jones' father, Tom Neyman, was an eccentric, artistic man who was drawn to a local playhouse in El Paso, Texas. Neyman was later cast as "the master" in Manos.

The story of Manos started out at the Festival Theatre in El Paso in the mid-1960s. Director Hal Warren was cast as Pietro Belcredi in Henry IV. Neyman was also cast in the play. Other actors cast in the play who would go on to star in Manos were William Bryan Jennings, John Reynolds and Bob Guidry. Jennings played a sheriff in Manos and Reynolds was cast in the most famous role as Torgo.

Warren's original script for Manos was titled Lodge of Sins and later changed to Fingers of Fate before it finally became Manos - The Hands of Fate. The Manos title was a result of a burned hand sculpture created by Neyman. Jones points out in the book that the Manos story was very similar to the pilot episode of Route 66. Warren had walk on roles in the TV show.

To save on costs, Warren employed many Festival Theatre cast members and help from friends and family. Not only was Neyman cast as the master of the cult of Manos, but his paintings, sculptures, and even his dog - Shanka was used in the film.

At the time Warren was working at the Festival Theatre and became interested in making Manos, he was also an insurance and fertilizer salesman. Jones remembers him as being a very enthusiastic man who believed he could achieve anything, including making a low budget film. He even made a bet with TV producer Stirling Silliphant that "anyone can make a movie." His sales pitch for selling insurance and fertilizer carried over into his motivation for making a movie. Although the results were disastrous, Warren's enthusiasm made up for a flawed film.

Jones also points out that the Torgo character was originally supposed to be a Satyr. This may explain why the legs of his trousers were stuffed with a wire sculpture and why actor John Reynolds walks with a strange waddle. Cast member suspected Reynolds of taking drugs during the filming of Manos. This explains his strange acting in the film. Sadly, Reynolds committed suicide just a few days before the premiere of the film in Texas in November of 1966.

Jones remembers the night of the premiere in sitting in the audience and being shocked at hearing a much older voice dubbed over her lines. She also remembers audience members laughing during scenes that were not meant to be funny. People sitting in the theater began to whisper back and forth to each other. It was obvious that the film was a dud

The book concludes with Jones speaking of her bitter struggles in getting involved in a sequel to the film, "Search For Valley Lodge," and the struggle for marketing control of the 2011 remastered print of Manos by young cinematographer Ben Solovey. Hal Warren's son, Joe, tried desperately to stop all merchandising and promotion of the remastered print. Things got really nasty and bitter between Joe Warren and Jones. Warren became greedy for a cut of all money flowing into the Manos cult.

As Jones states towards the ending of her book, viewers love and appreciate Manos the same way they might appreciate an Ed Wood movie, or a child's scribble drawing tacked up on the kitchen fridge door. It may not be high art, or even great art, but it's still fun to watch.

Manos is a masterpiece of bad cinema. I recommend that you see the remastered print put out on DVD and Blu-Ray by Synapse Films in 2015, then get a copy of Jones' book and read it carefully. Don't forget to view the extras of interviews with Jones, Neyman and Solovey. Happy viewing and happy reading!

Very nice review. Thank you so much for reading and glad you enjoyed the book.