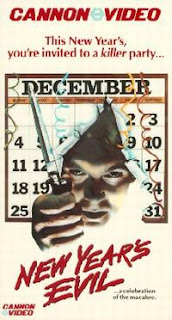 Happy Days star Roz Kelly stars in this early 1980s slasher film directed by Emmett Alston. Like so many horror films of the 1980s, this one is an attempt to cash in on the success of John Carpenter’s Halloween franchise.

Kelly is a punk rock mother hosting a New Year’s Eve party at a hip New Wave music club in downtown Los Angeles. Her teenage son comes to see her at the club with flowers, but she completely ignores him. A maniac killer, played by Kip Niven, calls Kelly at the club hotline to inform her that he will commit a murder every hour until 12 midnight as part of his New Year’s resolution. A club worker named Yvonne is the first victim to be killed in a bathtub in a club dressing room.

The second victim is a pretty blonde nurse at the local hospital. The killer predictably poses as a new hospital orderly who lures the nurse into a hospital room with champagne and proceeds to stab her to death after making out with her. Another nurse at the hospital discovers her body in a closet.

The killer continues to call Kelly at the music club in a disguised voice to inform her that he is committing murders. He even plays a taped recording over the phone of him stabbing the nurse at the hospital. Kelly is now forced to take his threats seriously. She asks the local police department for police protection.

By now the viewer has been exposed to lots of really bad punk rock performances, zebra striped T-shirts, and 1980s mullet hairstyles. Where are The Ramones, The Misfits and The Sex Pistols when we need them?

Feeling rejected by his mother, Kelly’s son sees his mother performing on television at the club with a punk band. In a fit of anger, he tears apart the roses he brought for her, and stretches one of her red nylon stalkings over his face as if he is about to become a killer himself. This is a particularly confusing scene because by now we already know who the killer is and what he looks like, so any attempt to suggest that the killer could be Kelly’s son seems unnecessary. The killer now shows up at another dance club in L.A. dressed in an obviously fake moustache and three-piece suit. He tells another pretty blonde girl at the bar that he is a business agent for many Hollywood actors in town. He convinces her to leave the club to attend a business party. She refuses to go alone with him, so she takes one of her club friends with her.

This spoils the plans of the killer to get her alone. The three drive in the killer’s Mercedes to a gas station, where the killer strangles one of the girls with a bag full of marijuana. He hides in a Dumpster to attack the second girl as she comes out of the gas station with a bottle of champagne. The killer stabs her to death. As the killer flees the scene, he is harassed at a stop light by a motorcycle gang. The killer speeds away from the motorcycle gang and hides out at a local drive-in theatre.

The movie screen advertises a film entitled Blood Feast as a feature playing at the theatre, but it is not Herschel Gordon Lewis’ schlock masterpiece from 1963, unfortunately. After stealing another car from a young couple making out at the drive-in, the killer shows up at the New Wave club, manages to club a police officer in the head at a back entrance, and puts his police uniform on, which conveniently fits him perfectly. Under police protection outside her dressing room, Kelly sits in front of a mirror putting on make-up as the killer suddenly appears in her room in a jogging outfit and a Halloween mask.

He holds a knife up to her and saying:“I’m fed up . . . You’re just like all the other women in my life. Women are manipulative, deceitful, immoral and very, very selfish!”

His reasoning for killing here seems very petty and unnecessary. Wouldn’t his actions make him “manipulative, deceitful, immoral and selfish?” If he was so fed up with his wife, why didn’t he just request a divorce from her? Why go through the troubles of killing several innocent women to get to her? In the post O.J. Simpson and Scott Peterson world we live in today, it seems highly unlikely that a man would go on a killing spree killing innocent victims just to prove a point with his wife.

However, I realize this film was made long before the O.J. Simpson ordeal of the1990s, and the Scott Peterson ordeal early in this decade. As the film comes to an end, Richard chains his wife to the bottom of the elevator and is chased by policemen who fire shots at him. He is chased to the top balcony of the building, where he puts the Halloween mask back on and jumps off the building, committing suicide. His son emotionally removes the mask from him.

The film ends with a shot of Kelly being wheeled into an ambulance. The driver of the ambulance is wearing Richard’s Halloween mask, and the paramedic on the passenger side lies dead on the floor of the ambulance. Could the killer now be Kelly’s son?

NEW YEAR’S EVIL follows in the long line-up of so many 1980s slasher/horror films. Like Silent Night, Deadly Night, My Bloody Valentine, Christmas Evil, Don’t Open ‘Til Christmas, April Fool’s Day, Mother’s Day, and so many others, NEW YEAR’S EVIL is an attempt to use a holiday title to cash in on the slasher craze of the 1980s.