In the spirit of this year's election season, 'The Dark Horse' 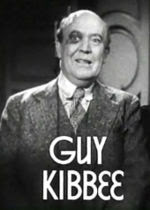 
A quick note: "The Dark Horse" is one of those wonderful 1930s programmers that would sit neglected in a film library (or perhaps sit seldom seen in a Bette Davis film collection DVD) if it wasn't for Turner Classic Movies. Film-lovers are in debt to TMC, which daily offers an invaluable history lesson of cinema with its offerings.


Now, on to "The Dark Horse." This is a delightful satire of politics that proves that, even 76 years ago, we weren't fooled by the absurdities of the political arena. Veteran actor Guy Kibbee plays, Zachary Hicks, a bumbling fool of a man who is accidentally nominated by his "Progressive" Party to be governor of an unnamed state after the two front-runners are deadlocked.


A party secretary, Kay Russell, (a very young Bette Davis) recommends that a fast-talking, charming cad of a man Hal S. Blake (forgotten leading man Warren William) be bailed out of jail -- where's he sitting due to unpaid child support -- to run Hicks' campaign. Blake does a masterful job, all while trying to stay one step ahead of his scheming, vindictive ex-wife (Vivienne Osborne) and romancing wary secretary Russell.


The key to the film, though, is the dumbness and naivete of 50sh Hays, thrust out of nowhere. Kibbee is perfect in the role. He provides understated humor in his misunderstanding of situations and constant "yes ... and maybe no" to any question. William's political operative is uncannyingly on-target, you could almost picture him spinning on cable news shows today. Davis hasn't much to do but viewers can sense her screen presence that would lead her to stardom. A fun, fast-paced film that still has relevance today, it's well worth watching when it's on TCM. Watch the trailer here.


Notes: Kibbee was a very much in demand character actor and B-film starrer in the 30s and early 40s. He is best known as the corrupt governor controlled by Jim Taylor in Frank Capra's 1939 classic "Mr. Smith Goes to Washington." He also starred in the only sound version of Sinclair Lewis' tale "Babbitt." Kibbee is great as Babbitt in that seldom-seen 1934 film, which aired recently on TCM. Frank McHugh, who played William's political sidekick, is best known as Father Tim Dowd in the 1944 Bing Crosby classic "Going My Way."