In honor of Bela Lugosi's birthday: The Corpse Vanishes 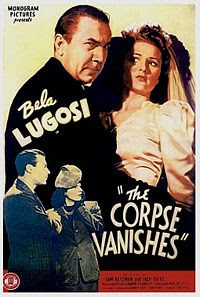 Today is Saturday, Oct. 20, 2012; The great Bela Lugosi has turned 130 years old! We honor one of his lesser films, but a key film to demonstrate why he was such a dedicated, great horror icon that lifted any production. Sit back and enjoy the film after reading the review. -- Doug Gibson

I love this film, while recognizing that the production values are virtually nil and the script leaves 1,000 plot holes and makes all the heroes seem like ninnies for not solving the crime early in the film. I have a soft heart for Bela Lugosi cheapie productions in the 1940s and this Monogram C movie is a hoot. The plot is sufficiently bizarre: Brides are dropping dead at the altar and their corpses are later whisked away before the real morticians alive. The only clue is that flowers are delivered to the victims minutes before they die. Neither the press or the police have a clue (although you'd think they could at least prevent the stealing of the corpse!) The public is up in arms, although there are still many weddings.


Enter nosy cub reporter Patricia Hunter (Walters). Prodded by her sexist editor, she tracks the flowers to the mysterious Dr. Lorenz (Lugosi) who resides with his crazy wife (Russell, in a wild performance) haggish sister, and her two sons, one a midget and the other a large simpleton. It turns out (of course) that Lorenz is the mad scientist, causing a death-like state to the wannabe brides, taking them to his laboratory (dig the fake brick walls!), withdrawing youth serum from the young ladies, and injecting it into his elderly wife to keep her youthful. (Another wonderful plot hole never explained is why Lorenz' wife is roughly 30 years older than him!). Hunter, aided by a lovesick doctor (Coffin), eventually foils Lorenz' evil plot, and of course, the pair are married (safely) at the end. The print I viewed did not reveal the fate of the sleeping brides --- perhaps Monogram lacked the budget to add a final scene?


The Corpse Vanishes is full of atmosphere. Lugosi, Urecal, Rossitto (who plays the midget) were all veterans of 1940s cheapies. Lugosi gives his usual great performance, and is aided by Russell, who acts truly crazy as his aged wife. Urecal provides a creepy atmosphere as well. This film is definitely worth a rental, and for those who are interested in Hollywood's history of B and C films, is worth a purchase.