Sammie and Rosie Get Laid 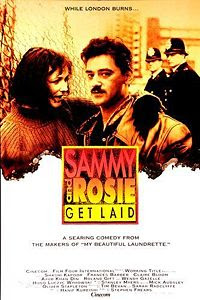 Sammy and Rosie Get Laid is a film that defines the end of a generation. It's the mid-1980s and the sexual and political revolutions of the 1960s still flourish, but definitely as a counter-culture. The ideas, as Rosie puts it, of "Freedom plus commitment" is being rejected by a British society that has embraced Margaret Thatcher and the ideals of strict conservative morality and capitalism. Still, in a pocket of color within London, Sammy, an immigrant accountant and his wife Rosie, a social worker, thrive. They are in love and have lovers. Sammy is currently having an affair with Wendy, an American artist with Ws tattoed on both buttocks. As Anna explains, everytime she bends over it spells WOW. Rosie will soon bed an attractive black squatter called Victoria (played by Fine Young Cannibals singer Gift) by those who like him. Sammy and Rosie like their life. They spend weekends at plays, essays, classes, and walking through their city, London. As they exclaim, they are Londoners, not Brits. An eclectic crowd surrounds them of gays, homeless, artists, council (public housing) dwellers, squatters, immigrant shopkeepers, scared, vicious police, and riots. However, life is changing. Sammy and Rosie's part of London is beginning to percolate as racial tensions and injustice bubble to the surface. The police kill a black woman who thought her home was being invaded. Before the film is over, the neighborhood will at times begin to resemble 1980s Beirut.

Critic Roger Ebert describes Sammy and Rosie as a film about London, and writes that those who love London will appreciate director Frears and screenwriter Kureishi's efforts to bring London to its multi-cultural life. Many different scenes of London are displayed: Sammy's office, an artist's studio, a wealthy woman's home, Sammy and Rosie's apartment, a council flat, a squatter's settlement, London parks, the airport, a riot in the streets, and a lot more. Kureishi's films have brought many Asian actors to mainstream audiences, and in Sammy and Rosie, the famous Indian actor Shashi Kapoor stars as Sammy's father Rafi, a former high political figure in his native country (It is never made clear what the country is) who has a reputation as a torturer and murderer of thousands. Rafi returns to England to see his son and visit an English woman, Alice -- played by Claire Bloom -- whom he loved and abandoned 30 years ago. Rafi also confides to Sammy that he is on the run from potential assassins, and that he wants to give his fortune to Sammy.

Rafi is suffering though. He continues to see a ghost of a man with one eye and a bandage over his head, who first appears as his cabby at the airport. This ghost will eventually lead Rafi to a terrifying experience. Rafi also finds the sexual lifestyle of Sammy and Rosie disturbing, but remains tolerant to a degree. However, his hopes to live a peaceful life with his son and daughter-in-law are threatened when details of his past as a torturer are slowly revealed. Rosie cannot accept it, and her lesbian friends are ready to kill Rafi. He also receives a deserved comeuppance from spurned lover Alice, who at times resembles a modern-day Miss Havershim.

Rafi's visit eventually brings Sammy and Rosie to a realization that perhaps they aren't as open minded as they thought. The tragedy of his time with them brings a disagreement --- Sammy can't abandon his dad, and Rosie can't forgive and forget what he's done. Eventually, his presence leads to a break-up. Sammy and Rosie Get Laid is a witty, at times touching film with an honest ending that portrays racism and oppression without blinders. There's no happy ending because it doesn't exist yet.
Posted by Plan9Crunch at 10:39 PM No comments:

Cat People -- Perfect film for a Friday the 13th! 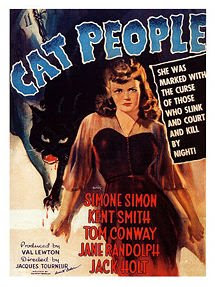 Cat People, 1942, 73 minutes, B/W, RKO Radio Pictures, Directed by Jacques Tourneur, produced by Val Lewton, Starring Simone Simon as Irena Dubrovna, Kent Smith as Oliver Reed, Tom Conway as Dr. Louis Judd and Jane Randolph as Alice Moore. Schlock-Meter rating: 8 and 1/2 stars out of 10.
Val Lewton's Cat People is a horror film that only works if a viewer uses his or her imagination. Those who are too lazy to think while watching a film will go away unimpressed with Cat People. Others, who use their intellect, will be pleased. The scare scenes are deliberately underplayed, and mood, tension and film noir is used to create a creepy sensation of dread and terror in this tale of a young beauty who turns deadly beast when her passion, or anger, is aroused.
Here's the plot: A bachelor architect named Oliver (Smith) becomes infatuated with a shy Serbian-born beauty named Irena (Simon). They first meet at a zoo, where she's sketching a panther. They fall in love and are married. There's just one hitch. His young bride refuses to make love with him, or even kiss him. Also, animals seems to hate her. At first, Oliver bears this with the patience of a saint. However, the lack of intimacy leads him to a romance with Alice (Randolph) a co-worker and longtime friend. In an effort to help Irena overcome her fear of intimacy, a semi-creepy psychiatrist (Conway) is hired to help treat her.
Simon as Irena is a talented actress who manages to convey helplessness with her fate with a sinister malice when aroused by anger. In what is definitely the most chilling scene, Irena -- angry at seeing Alice and Oliver together, follows Alice to an indoor pool. In the dark natatorium, Alice hears the growls of a panther. She dives into the pool, and eventually shrieks in terror as snarls and ripping sounds are heard. When others come to help and the lights are turned on, there is only the petite Irena, with a look of satisfied menace on her face. Also, when the psychiatrist Dr. Judd tries to seduce Irena, it leads to fatal results.
Cat People is not a perfect film. The extramarital romance between Oliver and Alice seems rushed and forced. If these two have worked together for years, why didn't the sparks fly earlier? Also, Oliver doesn't seem to try very hard to enjoy conjugal pleasures with his pretty bride, despite her protests. Not enough background is provided to Irena's previous life in a Serbian village which supposedly led to her present state of woman/animal.
Still, this is a must see for cult film fans. It's strength is what it leaves to the imagination, rather than what it provides on the screen. It's far superior to a 1980s re-make-in-name-only that bathed viewers in sex and gore. A sequel, Curse of the Cat People, was released in 1948.
-- Doug Gibson
Posted by Plan9Crunch at 8:53 PM No comments:

In his book Crackpot, director John Waters mentions Rope as his favorite Alfred Hitchcock film. Rope may not be Hitchcock’s most well-known effort, but it has all the suspense elements that make his films distinctive. The film is inspired by the real-life Leopold-Loeb murder case.

Two college buddies murder a classmate in their high rise New York apartment by strangling him with a rope. They place his body in a trunk and hold a party for his family and friends as a challenge to see if they will get caught. The trunk is used as a buffet table for the party.

A former professor of the two men named Rupert Cadell, played by James Stewart, attends the party. A conversation during the party leads to the topic of committing the perfect murder. Rupert and his two former students get into a philosophical debate as to whether or not moral concepts of right and wrong, good and evil apply to intellectually superior individuals. They conclude that those who are intellectually inferior in life should be murdered, ridding society of poverty and other ills.

The entire film takes place on one set of the high rise apartment, adding to the suspense. A maid almost discovers the body in the trunk as she cleans up after the party to place books in the trunk. Rupert returns to the apartment after the party, claiming to have left his cigarette case behind. The tension builds as the viewer waits in anticipation for Rupert to open the trunk to discover the body. Rope is a brilliant film made with a small number of actors and one location.

The philosophical debate the three main characters have about committing the perfect crime leads the viewer to believe that Rupert will at some point side with the two murders. In the end, he discovers their crime and argues that no human being has the right to take someone’s life, regardless of how “intellectually superior” they may think they are. A brilliant premise. Happy Viewing!!!
Posted by Plan9Crunch at 2:40 PM No comments:

Bela Lugosi in The Phantom Ship

By Doug Gibson
This British 1936 film is a treat for Lugosi fans. He is Anton Lorenzen, a broken-down one-armed sailor who inspires a pity as part of the doomed crew of the Mary Celeste, a ship that in real life in the 1870s was discovered in the Atlantic sans crew.
This film, released in a much longer -- unfortunately lost -- version as The Mystery of the Mary Celeste in Britain, is an entertaining murder mystery. It sort of plays like a rough version of Agatha Christie.
The plot: A captain and his bride (Shirley Grey) set sail with a ragged, rough, sinister ship's crew, including Lugosi, who

inspires pity. One by one people start to die. The captain and his wife disappear. Finally only Lugosi's Lorenzen and the sadistic first mate are left. At that point, Lugosi, acting like a 30s version of The Usual's Suspect's Keyser Soze, announces he is the killer, there to avenge a previous wrong. He kills off the first mate but then is hit by a beam of wood and falls into the sea to his death.
Before he dies, Lugosi brags of killing the capain and his wife. That scene appears clunky though. It almost sounds as if Lugosi's voice is dubbed. This is important because the ONLY remaining print is the 62-minute U.S. version, The Phantom Ship. The longer, lost 80-minute version, The Mystery of the Mary Celeste, apparently had an epilogue where the captain and his wife are discovered alive on an island, having escaped death on the Mary Celeste via a raft. It sure would be fun to locate a copy of the lost version. Lugosi biographer Frank Dello Stritto has located director Denison Clift's original shooting synopsis for the film and it includes the island epilogue.
Lugosi is great in The Phantom Ship, which used to be rare but in today's digital world can be found easily and in fact watched for free on the Net. He inspires pathos and pity and then effectively turns cold-blooded killer. He did this very well also in the 1930s The Black Cat, the Monogram Black Dragons and even Ed Wood's Bride of the Monster. Rest of cast is capable and the ship scenes are quite effective for the low budget. Definitely worth a buy. One of Lugosi's best late 1930s films.
Posted by Plan9Crunch at 10:39 PM 1 comment: