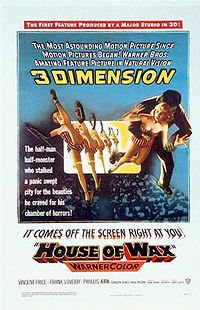 House of Wax, 1953, 90 minutes, Warner Brothers, Color. Directed by Andre De Toth. Starring Vincent Price as Professor Henry Jarrod, Frank Lovejoy as Lt. Tom Brennan, Phyllis Kirk as Sue Allen, and Charles Bronson as Igor. Schlock-Meter rating: 5 stars out of 10.
The real problem with House of Wax is that it's dull. Vincent Price does a fine job as the mad, scarred professor who wants to wax over many humans in his new museum of horrors, but the film is stagey, with lots of talk and few shocks.
House of Wax also fails to achieve any real cult status for another reason, which is a left-handed compliment. It's too competent a film technically to be corny. The sets are nice. The direction OK. The special effects adequate, and the color nice and unfaded.
The ending bumps House of Wax's Schlock-meter rating a tad. It's quite suspenseful to watch Price casually preparing to murder before being stopped and falling to his death into his own vat of wax. Movie fans will enjoy seeing a very young Charles Bronson in the role of Igor, a mute confederate of Price's.
Still, House of Wax is just too talky and dull in stretches to recommend as a rental. Catch it when it airs on Turner Classic Movies, and enjoy a master of the genre, Vincent Price, perform in his usual above-average manner.
-- Doug Gibson
Posted by Plan9Crunch at 4:17 PM 1 comment: 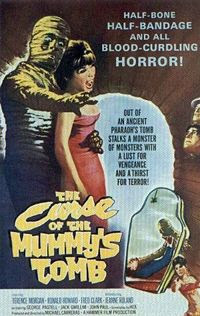 Curse of 's Tomb, 1964, Hammer, 81 minutes, color. Directed by Michael Carreras. Starring Terance Morgan as Adam Beauchamp/Be, son of Rameses VIII, Ronald Howard as John Bray, Fred Clark as Alexander King, Jeanne Roland as Annette Dubois, George Pastell as Hashmi Bey, Jack Gwylliam as Sir Giles Dalrymple, and Dickie Morgan as (Ra-Antef). Schlock-Meter rating: 4 stars out of 10.
The Curse of 's Tomb is a very poor sequel to Hammer's much better , starring Christopher Lee. The film suffers from a dull plot, too much talk, a boring shambling mummy and a really annoying female lead (Roland), who spends much of film practicing a really bogus Parisian accent.
The plot: An expedition travels to Egypt and digs up the remains of a slain prince. The leader of the expedition is murdered. His daughter, her fiance (Howard), and the others in the party decide to return to London and feature as a sideshow act, charging 10 cents a look (it's 1900, by the way.) Of course follows them and starts to exact its revenge on those who desecrated his grave.
The film boasts a couple of shocks, including hands being chopped off and a man's head squashed (implied, not seen). But the film is just so talky, with heavy-handed direction by Carreras. Nothing happens for long periods of time and we are treated to long stretches of dialogue, which as any film fan knows, is often used as a crutch to pad out a weak film. In this film's case, it's already a brief 81 minutes, but seems longer.
Even when appears, it's a disappointment. No attempt is made to humanize the monster. He just kills. Roland as the female lead is horrible. She's one of the most faithless characters in a movie and quickly goes from mourning her father's death to constant giggling.
Veteran actor Morgan is fairly decent as the villain who steals Roland from her fiance and hides a terrible secret. The most lively actor in the film may be the Carnival-like business huckster Alexander King (Clark), who outrages many by turning into a sideshow. Clark carries the roll with pizzaz, but he's killed off too early by . If this movie's on TV and you can't find anything else to watch, it will pass the time. Otherwise, go find a better mummy movie at the video store.
-- Doug Gibson
Posted by Plan9Crunch at 9:46 PM 1 comment: