The Final Countdown – Travel Back To December 6th, 1941

I remember seeing The Final Countdown at the North Star drive-in in the back of my parents’ blue Pinto when I was eight years old. I stuffed my face with popcorn for the first part of the movie, and then feel asleep during the second half. It wasn’t until recently that I got to see the entire film when I bought a DVD copy of it put out by Blue Underground Entertainment. The DVD is digitally mastered with THX sound and picture quality in the widescreen format.

Unlike so many of the films we review here at Plan 9 Crunch, The Final Countdown is a well-made film with an intelligent script and two great Hollywood actors – Kirk Douglas and Martin Sheen.

The story takes place aboard the U.S.S. Nimitz, a large nuclear powered aircraft naval carrier. The carrier is on routine maneuvers in the Pacific Ocean near Pearl Harbor when suddenly a bizarre electrical storm engulfs the carrier and takes it back in time to December 6th, 1941, just before the Japanese fleet attacks the harbor. The captain, played by Kirk Douglas, is forced to make a decision to change the course of history by attacking the Japanese fleet, or allow history to remain the same by not attacking.

The entire film plays out like an old episode of the Twilight Zone TV series. Some of the special effects scenes during the electrical storm are dated, but overall The Final Countdown is an intelligent, entertaining and suspenseful film worthy of viewing..

Surgikill is finally making it to DVD. The release is scheduled for next month and there will be a release party in Long Beach, Calif. with screenwriter Sherman Hirsh and star Bouvier. For iunfo, go to http://www.artfulthinking.org/Out_At_The_Movies.html Here is a re-cast of an earlier review:

In 1988, underground filmmaker Andy Milligan embarked on directing his final full-length feature film. Media Arts Productions LLC produced it. The film was to be a black comedy set in a small community hospital called Goode Community Hospital, named after Dr. Grace Goode, a character in the film played by Darlene Van Harlingen, also known as Bouvier. Her husband, John Van Harlingen, was the executive producer. This film is quite departure from the canon of other Milligan films, which were over the top sex and gore epics. The film was shot in an abandoned neighborhood clinic near downtown Los Angeles.
Dr. Goode is desperately trying to keep her small hospital in functioning order as some of her staff and patients are being murdered one by one. Not to mention that she is constantly being hounded to sell the hospital for other greedy business prospects.
The film is full of over-the-top gags and gimmicks that are occasionally funny and sometimes overstated and juvenile. For example, one particularly funny scene, at least to me, shows an old woman arriving at the hospital reception desk with a bedpan stuck to her butt. Two hospital orderlies attempt to pry it off her as she stands in complete embarrassment. Other scenes show characters being hit over the head with a bedpan, or splashed with urine from bedpans. These scenes quickly become overstated. Some of the characters constantly repeating: "We care about the people we care for," quickly gets exhausted too.
Another particularly funny scene shows an old woman lying on her back in the operating room with an arrow sticking out of her butt. Apparently her husband had mistaken her for an archery target and accidentally shot her in the butt. Perhaps her husband was on a hunting trip with Dick Cheney at the time, long before he became Vice President?
A latter scene in the same operating room has Dr. Harvey and Dr. Schweitzer performing a gallbladder surgery. They can’t seem to find the patient’s gallbladder, so they end up tearing out several of the organs from the patient. This particular scene has some connection to earlier Milligan films because it is intentionally and graphically violent, even if the organs used in the scene are obviously unconvincing and fake. Herschel Gordon Lewis would be proud of this scene.
A connection this film has to earlier Milligan films is the nurse-receptionist character and drag queen Ronna, who is very similar to the drag queen in Milligan’s excellent Fleshpot On 42nd Street, played by Neil Flanagan. Ronna is later revealed to be Robert Goode, who is Grace Goode’s cousin and the murderer in the film. Robert is murdering hospital staff and patients in hopes to inherit the family hospital for himself.
Nurse Ronna and Dr. Grace Goode are the two characters I enjoyed the most, and felt the audience would have the greatest connection to. The young, fresh out of medical school Dr. Schweitzer, seems a bit unconvincing to me as he constantly sucks on a baby’s pacifier, implying that he is young, inexperienced and "wet behind the ears." This character gets a bit annoying too. Many of the actors in the film are way over the top in their acting, and frequently shout their lines, much like in an early John Waters film.
Is Surgikill a great film? No, but who cares? I like movies to occasionally be campy, over-the-top and unbelievable, otherwise I would not be writing articles for this web site. Is Surgikill Andy Milligan’s best film? Probably not. I place my vote with Torture Dungeon, which I regard as his greatest masterpiece. Still, any die-hard fan of Andy Milligan cannot afford to miss this entry in his filmography. It may not have the same low-budget, gritty charm as his films of the late 1960s and early 1970s, but it is worthy of a viewing, if only to see what his last film looks like before his death in 1991. Like Milligan’s earlier films, I am confident that Surgikill will continue to gain a strong cult following as the years go by. Fans are eagerly awaiting a DVD release soon.
-- Steve D. Stones
Posted by Plan9Crunch at 10:57 AM No comments:

Boom in the Moon 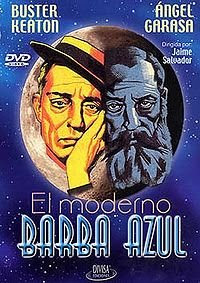 By Doug Gibson
There's really no big reason to see Boom In the Moon ... unless you are a cult film fanatic. (And that's why we at Plan 9 Crunch are reviewing it) It's an obscure Buster Keaton feature from 1946, made in Mexico when Keaton was at the low point of his career (he later rebounded via TV and cameos in big-budget films). But in the mid-1940s, Buster Keaton was begging for work.

But, first some background: In the 1920s, Keaton was the king of cinema comedy. But he had a drinking problem that became more acute when talkies came and he signed a multi-picture deal to make comedies with Jimmy Durante. To put it charitably, Durante's manic, often-unfunny rantings grated on Keaton's physical, stone-face comedy. During the making of their last film, "What No Beer?" Keaton was so drunk he trashed his dressing room and disappeared from the set for several days. After the film wrapped, MGM canned Keaton.

After that, Keaton existed for almost 20 years in a sort of has-been netherworld. His chief income was making mostly second-rate comedy shorts for Educational Pictures and Columbia. Those efforts were overshadowed by The Three Stooges and Little Rascals shorts. He had not starred in a film for a long time when he accepted the lead role in Boom in the Moon, or as it was known in Mexico, The Modern Bluebird ("El Moderno Barba Azul)

It is a very low budget, often strange movie starring Keaton and a bunch of mediocre Mexican actors. Buster plays a sailor in a lifeboat who drifts for weeks. He doesn't know the World War 2 is over and thinks he is in Japan when he lands in Mexico. He is immediately arrested and accused of being a killer of young girls. He's paired with another clownish prisoner (Angel Garasa). The pair are offered the choice of flying to the moon in a very goofy professor's rocket instead of execution. After a bunch of clowning they accept. Somehow the professor's very pretty niece (Virginia Seret) is in the rocket when it blasts off.

After a few days the rocket lands. The trio thinks they are on the moon, but they are really just a few miles from where they took off. The two convicts are cleared ... No more synopsis in case some readers want to watch the film. (It's hard to find. The best bet is to check amazon and ebay for used copies)

The first half is a little better than the last half because Keaton has the opportunity to use a lot of physical comedy, including a funny bit in his cell. The last half unfortunately allows too many actors to babble, including one Mexican actor -- playing a silly psychiatrist -- who will cause viewers to grind their teeth in pain at his performance. The rocket is so low budget that it would not have qualified for a C-movies serial in the 1930s. Still, Keaton occasionally, with his physical deadpan humor, comes off well in a few scenes. Ironically, Garasa, as Keaton's sidekick, is as nasal and annoying as Durante was with Keaton 15 years earlier.

Keaton has very little dialogue, although the others prattle on too much. Boom in the Moon could have been a lot better if it had been shot silent, and relied on Keaton's emotion and physical comedy. But that likely occurred to nobody in 1946.

The film was released theatrically in Mexico and played only in Spanish for 37 years, including U.S. TV on Spanish-speaking stations. It was briefly released via VHS with English dubbing in 1983. The release wasn't very long and the film has become a little hard to find. I'm glad I watched it -- I have wanted to for at least a decade. It was good to see Keaton starring in any feature in 1946. Despite the poverty-row film, Keaton still retained flashes of the great talent in the The General and Steamboat Bill Jr., etc.
Posted by Plan9Crunch at 8:14 AM No comments:

A book review: The Road to Los Angeles

John Fante's first novel, The Road to Los Angeles, sat in the trunk for more than 50 years, finally to be published after his death. It's a brilliant, manic, energetic, wild at times almost incoherent novel of a pretentious well-read 18 year old, Arturo Bandini, trying to sow his oats in Depression-era Southern California. If Holden Caulfield had been on drugs, he might have resembled Arturo Bandini.

The subject matter might have scared away 1930s publishers. Arturo, is to put it mildly, quite eccentric. He masturbates to photos of women who he develops fantasy relationships with, then executes them by tearing the pages apart. He scorns religion, mercilessly teasing his devout mother and sister. He's a thief, a vandal, and he delights in killing crabs and other small critters. He has a vivid imagination, and manages to write a novel in a week. He also has ups and downs, and frequently maims himself and thinks of suicide.

What keeps The Road to Los Angeles at a fast pace is the vivid imagination of the author Fante. At times the novel seems written in a stream of consciousness, so quickly do ideas, mad, cruel or otherwise, flow from the mind of the character Bandini. One of the high points of the novel is Fante's description of fish canneries, where Bandini works. They are putrid, choking, grotesque factories where employees are paid 25 cents an hour and rewarded with a smell that no bath can wash away.

Fante's spare, fast-paced prose, with short sentences, was an inspiration for Charles Bukowski, who regarded Fante as his idol. Fante eventually gravitated to Hollywood and wrote mostly screenplays. One Full of Life, was also made into a movie. However, hard living and untreated diabetes left him lame and blind. He was living in obscurity in the mid 1970s when Bukowski sought out his idol, and eventually stirred re-interest in Fante's work.