Every cult movie director has a “masterpiece” film that they are known for. Ed Wood has Plan 9 From Outer Space. Ted V. Mikels has The Corpse Grinders. Russ Meyer has “Faster Pussycat, Kill! . . . Kill!” Claudio Fragasso has Troll II, and Andy Milligan has Torture Dungeon. If Jerry Warren ever created a “masterpiece film,” I would have to say Man Beast is it. If you compare Man Beast to most of his other efforts, such as Teenage Zombies, The Wild World of Batwoman or The Incredible Petrified World, you will see that from a technical and acting standpoint, Man Beast ascends above all his other films. That’s not to say that Man Beast would ever make the American Film Institute’s 100 Best Films of All Time, but neither would 99.9 percent of all films ever made or will be made in the future.

Because Warren’s films are low budget, they have a very amateurish and hokey feeling about them that is comparable to a seventh grade stage production. Man Beast is amateurish, but it is not hokey by and sense of the word. This is also what makes it a much better film than most of Warren’s other efforts.

Connie Hayward is desperate to find her brother Jim, who is on an expedition in the Himalayan Mountains. With the aide of her boyfriend Hud and guide Steve Cameron, she sets out on a long journey into the Himalayas to find her brother. Along the way they encounter Dr. Erickson, an anthropologist, and a man named Varga. The group finds the remains of Jim Hayward’s sabotaged camp. Apparently someone or something invaded the camp and destroyed the cabin tents. The group arrives at the conclusion that Jim Hayward must now be dead, attacked by a Yeti.

Hud eventually discovers a cave that he leads the entire group to. In the cave, a giant Yeti, played by actor Rock Madison, attacks the group. The Yeti pushes Hud over a cliff to his death. Steve begins to suspect that Varga has something to do with the Yeti attacking the group and begins to mistrust him. Erickson thinks Steve is jittery and paranoid.

Varga is able to get Steve and Erickson to follow him to another cave location. While on route to the cave, an avalanche separates Steve from Varga and Erickson. Varga demands that Erickson follow him to the cave and forget about Steve. In the cave, Varga reveals that he is part Yeti by showing his hairy chest. He claims he must kill Erickson for discovering his secret of the Yeti.

After killing Erickson, Varga goes after Connie in an attempt to breed with her to perpetuate his Yeti blood strain. Steve comes to the rescue, and a fight ensues between the two men. Varga eventually falls off a cliff to his death, and Steve rides off into the sunset with Connie as his new lover.

In most Warren films, the costumes look fake and hilariously unconvincing. This is not the case with Man Beast. The Yeti creature looks quite convincing, yet not hokey in any way. The scenes of mountain climbers in Man Beast could very well rival any seen in big-budget Hollywood films, such as The Eiger Sanction or Cliffhanger.

My only criticism of this film is that the mountain explorers carry very small lightweight packs into the Himalayan Mountains. Every time they stop to set up camp, the camp magically appears to have very large cabintents set up with foldable sleeping cots inside. Any one who is a camper knows that you have to use very large, metal-framed packs to hold all your food, tents, sleeping bags and other necessary supplies. How someone could survive several days in the Himalayan Mountains with small packs that cannot hold many supplies, let alone full sized cabin tents with foldable cots is beyond me. I’m a camper myself, and I know from experience that camping for even a couple of days requires that I use a large, strong pack to carry all my necessary items.

Man Beast is one of many in the science fiction sub-genre of Bigfoot and Yeti films. Hammer Studios in England made the excellent The Abominable Snowman of The Himalayas in 1957, starring Peter Cushing and Forrest Tucker. Low budget director and producer W. Lee Wilder made The Snow Creature in 1954 to double bill at drive-in theaters with his Killers From Space. If you have never seen a Jerry Warren film, I recommend that you start with Man Beast, just to see what his best film looks like before you jump into many of his other low budget efforts. This one won’t freeze up your DVD player.
Posted by Plan9Crunch at 8:29 AM No comments: 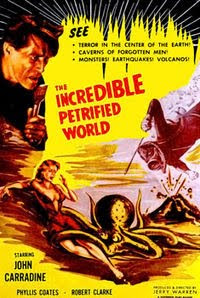 This is certainly not Jerry Warren’s worst effort, but it’s also not his best. I give my vote to Warren’s Man Beast as his best. Like all his films, it suffers greatly in budget and runs short in length. It helps that veteran actor John Carradine is cast in the film, and Robert Clarke, star of The Hideous Sun Demon and The Astounding She-Monster. Carradine was known as one of the busiest and hardest working actors in the entertainment industry. Somehow he was able to squeeze this turkey into his busy schedule.

Although the film has an interesting plot, it is full of unintentional humor as a result of its hampered budget. For example, oceanographer Carradine launches a diving bell from his boat near the Florida Keys. The bell contains four ocean explorers who are former students of Carradine’s. As the bell is launched, it’s obvious that the bell is too small to hold a five-year-old child comfortably, let alone four grown adults who are supposed to be inside the bell. When the bell breaks from the chain that connects it to the boat, the four explorers leave the bell in scuba gear. The bell is so small that the divers have to pretend as if they are leaving the top of the bell, but actually they are swimming up from behind it. A much larger diving bell should have been
used.

Another ridiculous scene shows Robert Clarke inside the bell dressed in his scuba gear sharpening the ends of three spears by rubbing them on the top of the radio gear. The spears are to be used to hunt for fish. Anyone who was ever a Boy Scout knows that the only way to sharpen something is to use a sharpening stone, or to carve a sharp point on the end with a pocketknife. Why Clarke is using the top of the radio gear to sharpen the spears is a bit odd, yet funny and typical of a low budget movie.

Seeing the lovely Phyllis Coates run around inside the underground ocean caverns in high heels is also very ridiculous, yet adds some unintentional humor to the film. Coates is best know as the panther girl in the 1950s serial Panther Girl of The Congo, and as Lois Lane in the 1950s Superman TV show. It’s unfortunate that Coates is not running around in her sexy panther girl outfit for this film. It would add greater interest to the film, especially for male viewers.

A question that always enters my mind every time I’ve seen this film is: If the divers have the ability to leave the diving bell after it breaks from the chain connected to the boat, why don’t they just swim to the top to get help? Why go through the effort of swimming to some underground caverns in the ocean only to be stranded for a longer period of time? This is a part of the plot that doesn’t make any sense to me.

The divers eventually encounter a man in the caverns who has been stranded there for fourteen years. He wears a phony wig and beard, and is dressed like a caveman. In Michael J. Weldon’s book The Psychotronic Encyclopedia of Film, Weldon identifies John Carradine as the actor playing the caveman. I have great respect for Weldon, but it is obvious that he has never seen The Incredible Petrified World; otherwise he would clearly know that Carradine is the oceanographer in the film, not the caveman.

The lesson to be learned from this film: If you’re going to explore the ocean in a diving bell with several people, use a much larger bell, and take enough supplies with you to last for several days. If you leave the bell, swim to the surface for help. Don’t go swimming around looking for non-existent ocean caverns. Always carry a pocketknife in case you need to carve spears to hunt for food. And lastly, don’t allow John Carradine to design your diving bell. If a small bell that barely fits a child breaks when he launches it into the ocean, imagine what would happen if
he designed a bell big enough to actually fit four grown adults? In the meantime, don’t forget your scuba gear, and be careful not to get “the bends” from being in the water too long. Keep an eye out for those sharks too!