Here are a few Halloween films that are more obscure to the average viewer, although cult film films likely know of them. These are not reviews, just capsules. We see lots of films that we have not reviewed. Perhaps we will get around to reviewing these films in the future. However, all are worthy Halloween offerings.

--- El Mundo de Los Vampiros (The World of the Vampires), 1960 -- The. Mexican vampire films of the 1950s and 1960s are an impressive addition to the genre. They are very atmospheric, and owe a lot to the Universal films of a generation earlier. I first saw this film, dubbed in English, as a child. It involves a vampire exacting revenge on a family of vampire hunters. I love the smoky atmosphere. Above is a Spanish-only version of the film.

--- Crowhaven Farm, 1971, is a very creepy TV movie of a couple inheriting a farm and soon having to deal with supernatural forces. It was one of those 1970s original movies of the week that used to be tucked into a 90-minute format, with commercials. John Carradine has a role in it, although it's a minor role. You can rent it on Amazon. You can buy it at Sinister Cinema. Or watch it below via YouTube. 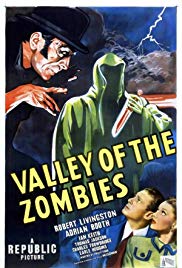 --- Valley of the Zombies, 1946, Ian Keith is a mostly forgotten actor today, but he was one of the finalists to play Dracula in 1931. In this Republic low-budget film, less than an hour, he plays a vampire-like character who forces a doctor to help him murder and get the blood he needs. Keith is creepy in the role and the film is lean and mean, a great, spooky hour to kill. You can watch it at DailyMotion website here.

--- The Monster Walks, 1932 -- Another movie that's under an hour, this creaky low-budget people-gathered-in-a-haunted-house-with-a-killer-loose is a lot of fun. That genre was popular 85 to 90 years ago with films such as The Cat and the Canary and The Old Dark House. It's interesting that in this film old cowboy films star Rex Lease is the hero. Horror genre veterans Mischa Auer and Sheldon Lewis are around for atmosphere. There's also a menacing ape around. You can watch it below via YouTube.