Mark of the Vampire, a missed opportunity

MGM's 1935 thriller, Mark of the Vampire, directed by Tod Browning, is such a marvelous film for 50 minutes that you just want to scream at what Browning did to cheat viewers in the final 9 minutes. Yeah, I know it's a sort of remake of the 1927 London After Midnight, (now lost) and Browning stubbornly refused to mess with that plot. But nevertheless, it was a big mistake to turn this supernatural fantasy into a murder mystery. There's a reason Mark of the Vampire is not discussed in the same revered tones today as Dracula, Frankenstein, or even White Zombie ... it's because that cheat of an ending.

First, the plot: Sir Karell Borotyn, master of an estate in central Europe, is found dead, bloodless, one night in his reclusive castle. The villagers are sure it's the work of a vampire, but Inspector Neumann (Lionel Atwill) scoffs at such a theory. And inquest declares the death from causes unknown. A planned wedding between the Sir Karrell's daughter, Irena, and a young man named Fedor Vicente, has been postponed. Baron Otto Von Zinden (Jean Hersholt) is handling the late man's estate.

Move forward nearly a year. The murder is unsolved. The castle is decaying, full of vermin and insects. Suddenly, two vampires are seen by villagers and other. They are described as the undead bodies of Count Mora (Bela Lugosi) and his daughter, Luna (Carroll Borland). Fedor and Irina are both attacked, presumably by the vampires. The villages are in an uproar. The skeptical Inspector Neumann is joined by eccentric Professor Zelen, played by Lionel Barrymore in an outstanding performance of a very chewy, Van Helsing-like role. Zelen supports the vampire theory. Through further investigation, it is revealed that a personage who resembles the dead Borotyn has been seen roaming the castle and heard playing the organ. A visit to his crypt reveals an empty coffin. Baron Otto Von Zinden is getting very nervous.

The gothic, horror atmosphere in this film is superb. Lugosi is at his best. His vampire performance, short though it is, rivals his Dracula performance. The beautiful Borland radiates screen presence as Luna. Inexplicably, she had a very small film career but her image became iconic because of this role. A scene where she swoops down, in batlike fashion, to the castle's floor, is one of the finest scenes I have seen. The ghostly, filthy decay of the castle is better than Browning's depictions in Dracula. As mentioned, Barrymore is great with his dedicated persistence as the "vampire seeker."

The final 10 minutes reveal the whole affair to be an elaborate practical joke to enable the actual killer, Baron Otto Von Zindon, to recreate the murder on the actor playing Sir Karell. That's bad enough, but Browning also turns Lugosi and Borland into actors and provides silly dialogue at the end. One reason the film maintains such effective mood and atmosphere for so long is because Browning only revealed the trick ending near the end of shooting. Legend has it that most of the cast was furious. In his biography, "The Immortal Count," Lugosi's biographer, Arthur Lennig, mentions Lugosi suggested that the real actors for Mora and Luna arrive at the very end, apologizing for arriving late. That sounds like a great idea that would have retained more fame for this otherwise excellent film, but Browning, and MGM, said no.

The short running time, 59 minutes, was trimmed from an original 75-minute film (the excess is lost). Some say that village humor scenes were cut, Others claim that a subplot, where it's mentioned that Mora committed incest with his daughter Luna, and later killed her and himself, was taken out.It is ironic that Lugosi's Mora has a clear bullet wound on the left side of his forehead/temple. As mentioned, Mark of the Vampire is a remake of Browning's London After Midnight, in which the faux monster is played, with truly horrifying makeup, by Lon Chaney Sr. A 45-minute version of that lost film has been gathered into a movie comprised entirely of still shots. It has played on TCM and turns out to be much better than it would seem to be. 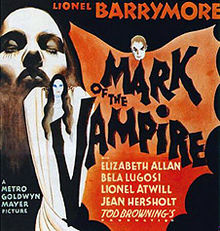