Newspaper mentions of Return of the Ape Man 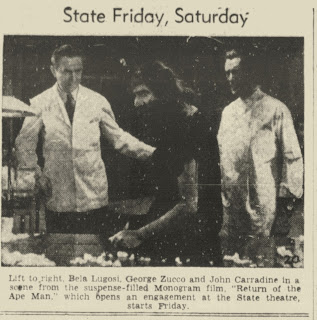 This week at Plan9Crunch we re-visit Monogram with Bela Lugosi's "Return of the Ape Man." For a very long time this was a hard Lugosi poverty-row effort to find. I remember high-fiving after snaring a weak DVD-R duplicate via E-Bay. Of course now, you can buy the Blu-Ray, which I have done. My friend David Grudt and I have checked Newspaper Archives and Newspaper.com and found a healthy selection of ads and even reviews, no doubt from the film's PR department, though.

Here's a few ads. It was paired with many films, including an 'oater, Trail to Gunsight, many serials, including Perils of Nyoka, a comedy short, Wedded Bliss (I ended up acquiring a copy of that Columbia short), as well as a Universal ghost comedy, Ghost Catchers. Also Monogram ran it with an East Side Kids feature, Follow the Leaders, and other features of the glorious '40s. It even was paired with what must have been a re-issue, the mid 1930s Boris Karloff horror, The Walking Dead. The film also headlines a Halloween spook show! 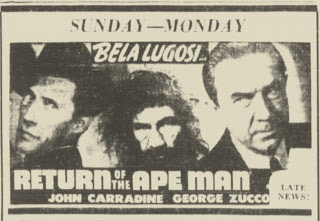 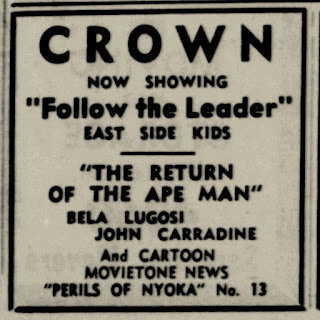 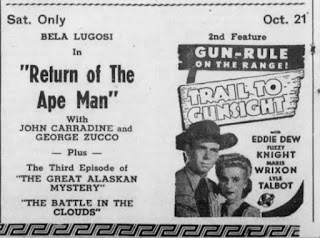 Here is a review of Return of the Ape Man I posted in the past:

In “Return of the Ape Man,” one of Bela Lugosi’s final Monogram offerings, his deviously mad scientist, Professor Dexter, offers , with polite arrogance, this laconic remark at a fashionable party to another guest. “You know, some people’s brains would never be missed.” Shortly afterward, Dexter tries to prove it by luring the intended of his partner’s niece to his laboratory for an unwilling partial brain transfer to a reanimated, prehistoric “ape man.” Only the interference of partner Professor Gilmore, with the added persuasion of a gun, stops Dexter. “He might not die,” is Dexter’s defense. 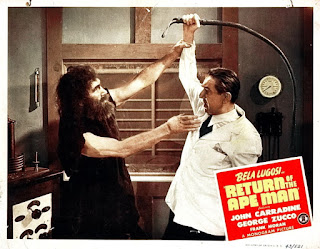 If not for Lugosi, “Return of the Ape Man” would be virtually forgotten. Even John Carradine underplays his role as Gilmore to the point of near narcolepsy. The rest of the cast also seems to play their roles with lethargy. The script, frankly, is unimaginative, and cheats viewers of a climax with Bela’s character alive. But Lugosi’s Dexter is his second-best mad scientist role; only Dr. Vollin in 1935’s “The Raven,” surpasses Prof. Gilmore in mad, ethics-be-damned-crime-be-damned, obsession. Like Vollin, Gilmore is courtly, charismatic, dedicated and mad as a hatter in his desire to reanimate a primitive human and provide him a decent brain, at any cost.
Casual fans of the genre may not know that Lugosi played a mad scientist far more often on screen than he did a vampire. He has some great lines in “Return of the Ape Man.” They include: “Murder is an ugly word. As a scientist I don’t recognize it;” and “Fool, you’ll pay for this!” is Dexter’s angry retort when Gilmore stops him the first time. The too-passive Gilmore eventually becomes the subject of Dexter’s partial brain transplant, and the mad glee that fills the countenance of Lugosi’s Dexter is chilling and unforgettable. Do yourself a favor, Lugosi fans, see “Return of the Ape Man.
Now, here are a few newspaper "reviews" of the film and more ads.: One review is a "phooey" pan from then Hollywood columnist Jimmie Fidler. 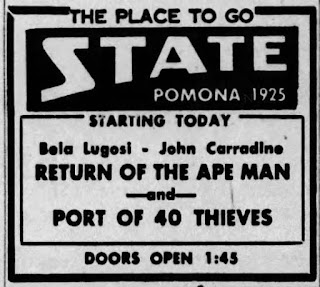 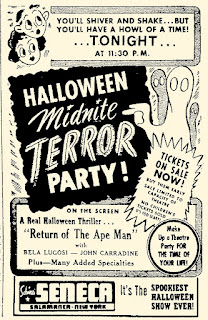 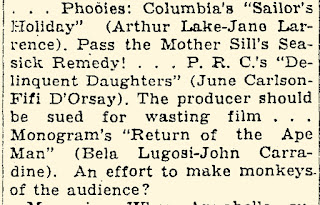 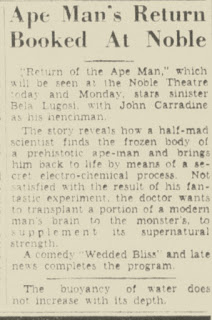 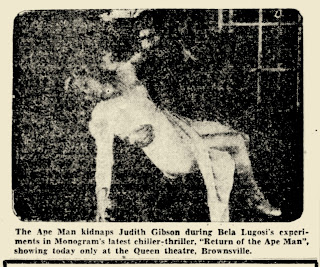 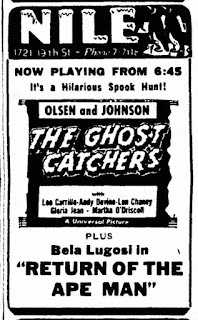 Watch this film via YouTube here.
Posted by Plan9Crunch at 8:34 PM