The Sadist is a low-budget scary masterpiece 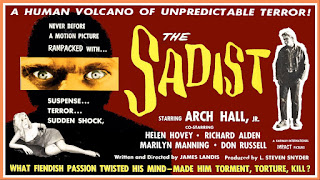 Simply stated, ‘The Sadist’ (watch it here) will scare the hell out of you: Imagine that you are trapped with a psychopath who holds all the cards and seems intent on killing you. While he’s terrorizing you, you can hear the sounds of life going on for all those others who are safe in the world, but you’re just a little bit away from normalcy, and you’re going to die as a result.
That’s the plot of “The Sadist,” a nail-biting, knuckle-crunching, nerve-wracking little movie made in 1963 for $33,000. The plot: Three schoolteachers, two men and a woman, are heading to a baseball game. A detour leads them to psychopath Charlie Tibbs (Arch Hall Jr.) and his moronic girlfriend, Judy Bradshaw (Marilyn Manning). The tension and fear level builds -- in real time, by the way, just like "High Noon" -- as it becomes apparent what a murderous loon Tibbs is. He quickly kills one of the male teachers and engages in a game of I'm Going To Kill You Soon with the others.

Make no mistake: Tibbs is planning to kill the others, Doris Page (Helen Hovey), and Ed Stiles (Richard Alden). They know he lusts to torture and kill them, and like mice locked in a cage with a snake, they desperately seek to extend their terror-filled existence just a little longer. Big-budget studios spent scores of millions of dollars making "Natural Born Killers" and "Kalifornia," but both pale in comparison to the impact of director James Landis' "The Sadist," which has steadily gained fans since its obscure beginnings. The cinematography is top-notch and it ought to be since it was helmed by future Oscar winner Vilmos Zsigmond.

I mention the characters can hear normal life going on through the 94 tense minutes of this film. The radio of the teachers' car is left on and we hear the pre-game show for the Dodgers baseball game. The jocular tone of the announcers heightens the nightmare the victims are living through. They will die yet life will go on. It's a tough message for most of us to accept. The secret of good horror filmmaking is to care about the victims to the point of empathy. Landis achieves that in "The Sadist." 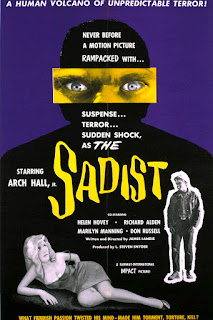 The film was made by producer Arch Hall Sr., who made several films in the 1960s starring his teenage son, Arch Hall Jr. Most of those films are campy for their earnest cheapness . Arch Jr. was a singer with an striking -- not always to a positive -- face. He's best known for the unlikely hit "Eegah," also starring Manning, which has been lampooned on Mystery Science Theater 3000. Hall Jr. made only one great film and it was "The Sadist." He is terrifyingly loony and evil playing with his victims. Hall and Manning must have reminded audiences of the then-recent real-like killer Charles Starkweather and girlfriend Caril Fugate, who went on a murder spree only five years earlier.

I want to spare a paragraph talking about Helen Hovey, who played the victim Doris Page. This was the only film she ever made but her acting is mature. She doesn't fall to pieces or gain unnatural inner strength. The ordeal turns her into a survivor, a person willing to scrabble and fight for every second of life. I have no idea if this was intentional but watch her closely in the film. Hovey's character gets more beautiful as the film progresses.

"The Sadist" was paired with another cult film, "The Incredibly Strange Creatures Who Stopped Living and Became Mixed- Up Zombies" on the drive-in circuit of the 1960s. It took decades for this film to gain its full respect. Had it been made today, DVD exposure probably would have made stars of Hall Jr. and Hovey. (Below is a scene with Hall and Manning and another with Manning terrorizing Hovey). 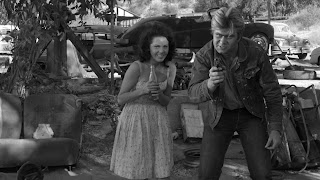 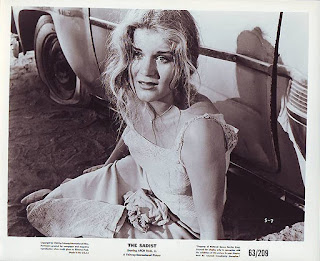