The “stars” of the Universal horror films of the 1930s and 1940s are “Frankenstein,” “Dracula,” “The Wolf Man,” “The Mummy,” “The Invisible Man” and so on. But dozens of horror mysteries were churned out by the studio over 15 years, and some are gems have been mostly forgotten. “Secret of the Blue Room,” a $69,000 programmer, a locked-room mystery thriller, is one forgotten gem.

The tight-as-a-drum plot involves five persons gathered together in a Hungarian castle. They are wealthy castle owner Robert von Helldorf (Atwill), his daughter, Irene (Stuart), and her three suitors, Captain Walter Brink (Lukas), reporter Frank Faber (Stevens), and younger Thomas Brandt (Janney), who is most emotional about his love for Irene. He rashly proposes to her, an offer she kindly deflects. The conversation leads to the castle’s “Blue Room,” a locked bedroom where three murders occurred 20 years earlier. Apparently, anyone who stays in the room dies.

The three suitors, egged on by Brandt, agree to spend nights in the Blue Room as a means of proving their love to Irene. Naturally, a disappearance and murder mystery develops. Besides the main plot, there is a mysterious stranger who one of the castle’s servants sometimes shelters. Veteran character actor Arnold (“You Can’t Take It With You,” “Mr. Smith Goes to Washington”), provides an excellent supporting role as a police commissioner who investigates the crimes in the Blue Room.

The film doesn’t have an ounce of fat to it and moves quickly. The plot twists and eventual resolution are very well-paced. Atwill, who had yet to bloat up, is at his best in this low-budget offering. Perhaps understanding it is more mystery than horror, he underplays his role, rather than be a ham (which he could be). Stuart’s Irene is yes, the same Gloria Stuart who would play the elderly Rose in “Titanic” 64 years later. Hungarian Paul Lukas is superb with his continental manners as dashing Irene suitor Captain Brink with a hint of mystery. It’s a role that also could have been handled by Universal star Bela Lugosi, but the small budget likely provided the opportunity for Lukas.

“Secret of the Blue Room” has a lot of old-castle, stormy, windy weather atmosphere. It was made a little while after “The Old Dark House,” a high-budget Universal horror/comedy directed by James Whale. It looks as if some of the sets from “Old Dark House” were used in this film. Director Kurt Neumann is no Whale but he is smart enough to keep the pace fast, allow the plot twists to move smoothly, and keep the cast under control. This film can be watched via YouTube and it’s a perfect late-night cinema treat on a cold night with a hot beverage. 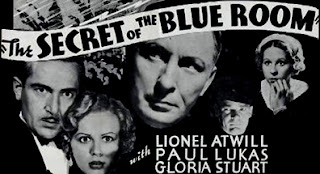 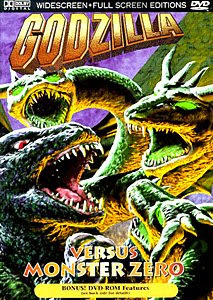 This is an extremely enjoyable, very campy monster-fest with shoddy but fun special effects as Godzilla and Rodan team up to defeat Monster Zero (also known as Ghidorah) and thwart the plans of the controller and the rest of the evil baddies who rule Planet X in a galaxy far, far away. Also, vampy Asian Kumi Mizuno plays a semi-robot spy who gets the hots for mumbling Nick Adams, the Marlon Brando of low budget shockers.

As is often the case with these wonderfully kitschy Japanese monster films, the plot seems to have been hatched out after an all-night mushroom party. Astronauts Adams and Takarada explore Planet X. There, they are told that Monster Zero threatens that planet and Godzilla and Rodan are needed on loan to beat him. The Planet Xers, to get Earth to help, offer a cure for all diseases as a swap for the muscle-bound monsters. Earth agrees but after the monsters are delivered, the baddies of Planet X pull a fast one, telling earthlings that unless they agree to be colonized, the three monsters will destroy Earth.

Chaos results with lots of stock footage of wars and riots. All looks grim, but eventually hard-working scientists learn that a recently invented tinny sound can render the Planet X baddies insensible; also an electronic ray is invented to free Godzilla and Rodan from the computerized clutches of the Planet Xers, who are controlled by computers themselves.

The dubbing is surprisingly well done in the American version on AMC. Adams' Jersey persona is in great form as he utters lines like "dirty double crossers," "you rats," and even "baby!" during his romance with the spy Mizuno's Miss Namikawa. Notes: Adams and Mizuno were briefly lovers off the screen. They also starred together in Frankenstein Conquers the World. In 1968, Adams, who had once been nominated for an Academy Award before his career slipped, died of a drug overdose.

Posted by Plan9Crunch at 9:50 AM No comments: 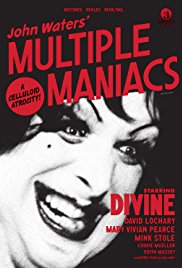 Thanks to my co-blogger and good friend Doug Gibson, I now have a beautiful Blu-Ray print of John Waters' 1970 carny masterpiece – Multiple Maniacs. Doug purchased the film for me as a Christmas gift. The print is a remastered special edition put out by Criterion/Janus Films in 2016 with an audio commentary by director Waters. The film also has interviews with cast and crew, such as George Figgs, who played Jesus Christ, and Mink Stole, who has at least two roles in the film, including a “church whore,” as she refers to herself in the film.

The film follows a group of misfits known as “the Cavalcade of Perversions” who set up a fast and cheap carnival attraction with such performances as a puke eater, a dope addict, a woman licking a bicycle seat and two men kissing. The main attraction, of course, is Lady Divine, who kills and robs patrons of their money and jewelry. Most of the film shows a strange and hateful conflict between Divine and her boyfriend known as Mr.David – played by David Lochary. 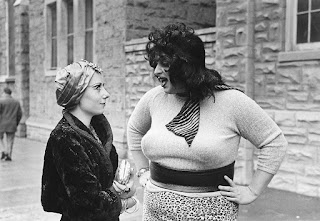 The entire film has a home movie, Andy Warhol experimental flavor to it, which adds greatly and never distracts from its tone and style. Many scenes show shaky camera movement and the shadows of the cameraman and crew on the ground during the filmed scene. Actors often look as if they are hesitant to deliver their lines, or too rigid in their composure to improvise their lines.

Look carefully for cars driving by in the background in a scene where actor George Figgs as Jesus Christ blesses loaves of store-bought, wrapped bread and canned tuna on a plastic, folding picnic table. As his followers gorge themselves on tuna and bread, modern cars drive by in the distance. Does this distract from the film in any way? Heck no. This is guerrilla film making at its best.

Low-budget director Andy Milligan does something similar in his 1971 cult classic Guru The Mad Monk in which the sound of driving cars can be heard in a scene that is supposed to take place in the Middle Ages in front of a church. Milligan often shows power lines in the background of scenes in which the time period depicted is many centuries or decades before electricity and the Industrial Revolution.

Figgs as Christ carries a cross and wears a crown of thorns just before his crucifixion in one scene. These images are juxtaposed with scenes of Mink Stole masturbating Lady Divine's anus with a rosary in a church chapel. Never in the history of cinema up to that point had such perverse, blasphemous images been put up on the screen. Director Waters loves to smear this kind of stuff in the faces of his viewers, and never would he want to apologize for it. Can you blame him? All this becomes a precursor leading up to Divine's excrement eating scene in Waters' next film – Pink Flamingos (1972). 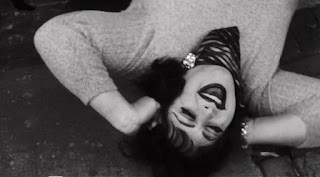 Perhaps the most bizarre scene is saved for the near ending of the film when a giant paper mache lobster, known as Lobstora, rapes and has sex with Lady Divine. Divine makes no attempt to free herself from the fake lobster, and appears to be enjoying the lobster sex as she laughs hysterically during the entire scene. As the lobster backs away, broken parts of it are shown on the couch in which the sex act took place. Lady Divine now becomes hysterical and goes on a rampage of destruction.

As an essay included in the Blu-Ray written by Linda Yablonsky states: “Multiple Maniacs is a monster movie for people who would rather watch a comedy.”

As a big fan of all of Waters' films, I've felt for many years that Pink Flamingos is Waters' greatest early film. After viewing this newly remastered Blu-Ray print from Criterion/Janus Films, I've now changed my mind. Multiple Maniacs is not to be missed. It is Waters' best early film. Happy viewing. 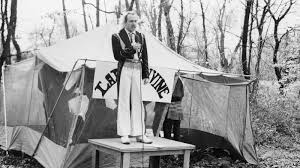 "The Amazing Mr. X," a 78-minute 1948 release from Eagle-Lion films, is likely the best chance to fully observe the talents of Turhan Bey, a charismatic contract actor of the late 1930s early 1940s who found his major-studio work had dried up after World War II. "The Amazing Mr. X" was a fortunate opportunity for Bey.

The plot involves two sisters who live in comfort by the sea. The elder sister, played by Lynn Bari, is obsessed with her late husband (Donald Curtis) and thinks she hears him calling. The younger sister, played by Cathy O'Donnell, is worried about her sister. Eventually, they meet up with a smooth, charismatic psychic (Bey) who promises to help Bari make communication with her late husband. Eventually, the younger O'Donnell becomes more obsessed with Bey than her older sister. Character actor Richard Carlson plays the good guy, Bari's fiance, in this flick, working to expose Bey as a fraud. Although the B-movie's longer-than-needed running time causes the action at times to drag, it moves toward an effective climax.

One interesting facet of Bey's spiritualist is that although he's obviously a phony, he's a sympathetic character. That was a smart move from director William Wyler. Bey's charisma has also preserved the film's iconic cult status. It is occasionally shown at revival film festivals. The scenes of Bari being "haunted" by her "dead husband" are spooky. The Austrian-born Bey enjoyed a long life, dying at age 90. Watch the film above.