The Mummy and the Curse of the Jackals = cinema stinky 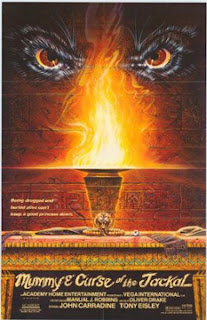 Sinister Cinema has released "The Mummy and the Curse of the Jackals," a truly terrible film that was almost completed in 1969 by the Vega International, a Las Vegas-based film company. Never released to theaters, it was eventually grabbed for video by Academy Home Entertainment in 1986 -- the peak of the video era when fly-by-night video firms were grabbing cheapo 60s and 70s thrillers and packaging them as if they were more modern horros.

The film stars Anthony Eisley as a scientist, David Barrie, obsessed with a the perfectly preserved mummified corpse of the Princess Akana (Marliza Pons). He believes he can bring her back to life and does, but it comes with a couple of twists. The first is that Eisley -- in scenes so badly produced that they defy description -- turns into a jackal/werewolf and kills a few unluckies. Also, Ankara's revival prompts the revival of the mummy of one of her past admirers. They monsters eventually traipse through parts of Las Vegas where the most fun is watching passers-by try hard, and often unsuccessfully, not to giggle.

John Carradine is the "name" attached to the project. He shares a couple of scenes as a mentor to Eisley's scientist. Both Eisley and Carradine are solid professional who provide good acting performances. The rest of the cast varies from adequate to mediocre. The music is canned stuff that fails to provide any lift or emotion to the scenes. The whole mess ends in a confusing manner, with the werewolf and the mummy fighting in a lake and the Princess Ankara decomposing, with very poor FX.

As is the case with these type of films, the stoy behind the film is more interesting. As bad as The Mummy and the Curse of the Jackals is, it is faithful in plot to the old Universal mummy films, particularly the Kharis films of the 1940s. Indeed, the director, Oliver Drake, an old director of low-budget westerns, wrote the screenplay for the 1943 Universal Kharis film, "The Mummy's Curse." According to film historian Tom Weaver's exhaustive book, "John Carradine: The Films," Lon Chaney Jr. was originally tabbed to be the werewolf but dropped out. The next choice was another low-budget actor, Scott Brady. After he dropped out, Eisley took over. For Carradine, it was another of those walk-on roles where he would stay a day or two (at $1,000 a day), read his lines and leave, never seeing the completed script or film, and forgetting that he had ever been in it when queried years later. Perhaps Carradine's most humorous line is when he tells a copy, "We can't just stand by and let a 4,000-year-old mummy and  a jackal man take over the city!"

Enjoy a scene from this wretched film below. It really captures how bad this film is:

Email ThisBlogThis!Share to TwitterShare to FacebookShare to Pinterest
Labels: Anthony Eisley, John Carradine, Oliver Drake, Sinister Cinema, The Mummy and the Curse of the Jackal